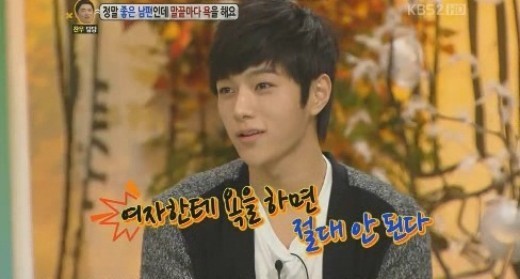 INFINITE’s L Is a Perfect Gentleman

INFINITE’s L has won the hearts of ladies with his gentleman-like manners.

On the December 3 broadcast of “Hello,” L and his fellow member Kim Sung Kyu, along with NS Yoon-J and Jewelry’s Kim Yae Won were the guests on the show.

One of the stories on the show was about a husband who was verbally abusive towards his wife. The husband claimed that he was just joking around. In response L said, “You must never swear at a woman.” He received enthusiastic response from the female audience members who were sympathetic to the wife’s problem.

He later showed more gentleman-like behavior. When another female story-teller came down the slide and had trouble getting up, L reached out and offered his hand to help her up.

L’s good manners were noticed by the other cast members and they praised him for his gentlemanly acts.