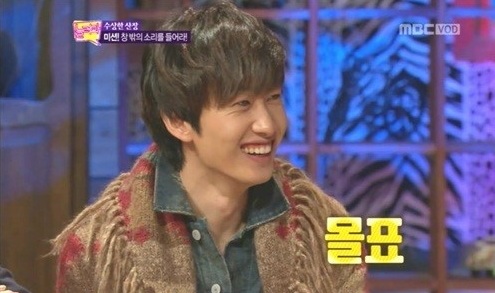 Super Junior’s Eunhyuk starred in MBC “Come to Play” on December 3 and shared a story about getting voted the ugliest member in the group.

“All the members voted for me. I was #1 with the group’s full support,” Eunhyuk said, as he said it was one of the very few moments he topped the group in a survey.

He later explained the votes came strictly based on the shape of each member’s nose, eyes, ears and mouth, and not necessarily the facial appearance as a whole. He added, “Fans later gave me encouraging words, saying I looked better than Siwon. But none of those words really helped (because I knew they’re lying).”

Eunhyuk was later asked to pick Super Junior members he thought had worse appearances than him. First, he picked Shindong, saying, “It’s not even a member of gaining weight or not. He’s just not better looking than me.” Ryeowook was the second member he picked, as he said, “Well, at least he can sing.”

Finally, Eunhyuk picked Ye Sung, and said, “He really hates me talking about his appearance. He would even follow me backstage.”