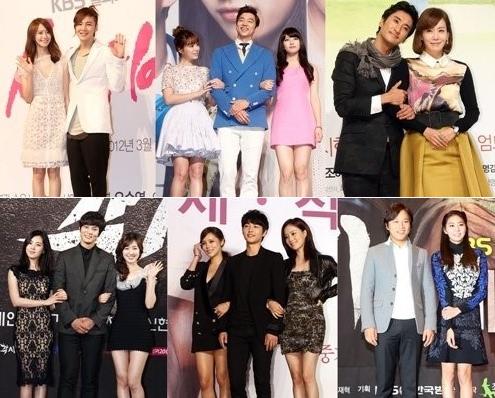 2012 KBS Drama Review – What Will Receive the Grand Prize?

In 2012, there were many notable and popular dramas on KBS. From historical dramas to fantasy romances to serious melodramas, television viewers had plenty to see and enjoy this year.

There was “You Who Rolled in Unexpectedly” that coined the term “Shi-World (World of in-laws), the stories of love and betrayal like “Equator Man” and “Nice Guy”, and “Bridal Mask” that made us believe in heroes.

There was also the fantasy romance “Big”, the romantic comedy “Haeundae Lovers”, the fantasy comedy “Ulala Couple”, the story of a father and daughter “My Daughter Seo Young”, and the epic period drama “The King’s Dream.”

In anticipation of the “2012 KBS Drama Acting Awards” let’s take a look back at some memorable KBS dramas of 2012.

“Dream High 2” initially received a lot of interesting for its cast of idols with Jung Jin Woon from 2AM, Jiyeon from Tara, JB of JJ Project (who at that time was pre-debut), Hyorin of Sistar, and Ailee. However, the drama was not very popular, having the lowest viewership rating compared to its competitions.

After “Drama High,” KBS followed up with “Love Rain,” starring Jang Geun Suk, Yoona of Girls’ Generation, Kim Shi Hoo, and Seo In Gook. The melodrama that is set in the 1970s and in 2012 did its best to attract viewers, but like its predecessor failed to do so. However, the sentimental love story between Jang Geun Suk and Yoona gathered a cult following.

“Big”, starring Gong Yoo and Lee Min Jung, ended the trend of casting idols but did not do much better than the previous two. Although it had a 10% viewer rating in the beginning, the ratings fell towards the end of the drama. Although the drama had “Nation’s First Love” Suzy as one of the supporting cast members, apparently viewers did not think that was enough.

“Haeundae Lovers” and “Ulala Couple” wrapped up the year for Monday-Tuesday dramas on KBS. “Haeundae Lovers” starring Kim Kang Woo and Jo Yeo Jung hovered around the 10% viewer rating during its season, making the KBS officials nervous. However, “Ulala Couple” with Shin Hyun Joon and Kim Jung Eun ended the year went for KBS as the number one drama for that time slot.

KBS’ weekend drama “You Who Rolled in Unexpectedly” received an awesome 40% in its viewer rating. Viewers showed much attention the story with Kim Nam Joo and Yoo Joon Sang. This drama also coined several popular phrases such as “Shi-World”, “Nation’s Husband”, and “The Nation’s Most Unpleasant.”

Viewers also enjoyed “My Daughter Seo Young” with 30% viewer ratings. The drama, starring Lee Bo Young and Lee Sang Yoon, captivated the audience with the love-hate relationship between a daughter and father.

Through Um Tae Woong and Lee Joon Hyuk of “Equator Man” viewers were able to get a taste of what love and betrayal can really do. Um Tae Woong shook the viewers up with his incredible acting skills. Lee Joon Hyuk was not to be outdone with his impressive portrayal of a truly bad guy.

“Bridal Mask” was set during the time when Korea was under Japanese occupation and sparked the “Bridal Mask Game” craze. Joowon’s portrayal of a man who becomes a hero through trials and suffering earned him a following called “Joowon Disease.”

“Nice Guy” was the melodrama that brought the viewers into tears. Song Joong Ki and Moon Chae Won shared betrayal and a doomed romance. The acting of the two lovers and Park Shi Yeon and Kim Tae Hoon showed the fine line between good and evil. This drama rated consistently in the teens for viewership.

Following “Nice Guy” KBS changed things up with historical fantasy “Jeon Woo Chi” starring Cha Tae Hyun and UEE of After School. Although it aired on November 21 the drama is already drawing a lot of attention as the adaption of the popular fusion novel of the same title. Cha Tae Hyun, with his diverse skills in entertainment and acting, is also receiving attention for this energetic performance.

It would not be exaggerated to say that KBS’ everyday drama “Moon and Stars for You” has no real competition. For six months the drama has lead the ratings. Jo Dong Hyuk and Seo Ji Hye lead the cast in the story of conflict and resolution within a family. The popularity has seem to carry over for “Cheer Up, Mr. Kim”, the newest KBS drama starring Kim Dong Wan of Shinhwa.