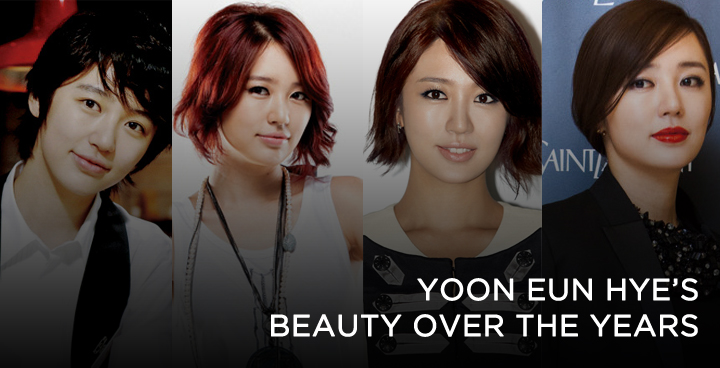 Yoon Eun Hye has taken the kpop and kdrama world by the storm these past seventeen years. She’s gone through transformation after transformation, never afraid to change and challenge her style. According to her stylist, this actress personally takes care of her own makeup. For celebrities, it’s vital that they have the perfect hair and makeup. As such, it’s impressive to hear that Yoon Eun Hye is skilled and confident enough to work her own makeup.

Check out Yoon Eun Hye’s beauty transformation throughout the years by scrolling through the gallery!

2006: She left Baby V.O.X. to embark on a new challenge, acting. She starred in popular drama “Goong (aka Princess Hours)” as a bright and lively Shin Chae Kyung. To portray her high school character, she kept her makeup simple with a pink lip-gloss and blush.

2007: Her role as a girl disguised as a boy in “Coffee Prince” was a huge hit. In line with her character, she did not bother with girly hair and makeup. A simple boyish cut and natural eyebrows were all that was to her Go Eun Chan look. However, the lack of heavy makeup emphasized her youthful beauty.

2007: Yoon Eun Hye gave her boyish cut a sexy feminine appeal with some easy changes. She brushed off her bangs to the side and added some volume to her hair with hairspray. She emphasized her beautiful eyes with an edgy black eyeliner and silver eye shadow.

2007: At the Busan International Film Festival

2008: She showed off various hairstyles through her role as the wealthy Kang Hye Na in “Please Take Care of My Fair Lady.” As the heiress to the largest conglomerate company, Yoon Eun Hye had her fun experimenting with various fashion and beauty styles. She caused a red hair syndrome in Korea that year.

2009: Yoon Eun Hye looked chic with her updo. She added an edgy yet feminine flair by blow-drying her bangs to add more volume. Here’s a tip! It’s easier to style your hair into an updo, if you curl your hair beforehand.

2010: She transformed herself yet again with a bob. She was able add a naturally messy by crinkling her locks with her fingers as she blow dried them. Yoon Eun Hye emphasized her sophisticated chic look with smoky eye makeup, applying eyeliner on her bottom eyelid as well.

2010: Yoon Eun Hye added some light curls into her hair and focused on her eye makeup. She added black eyeliner wings and softened them with a brown eye shadows, which complemented with her outfit.

2011: She added volume to her roots by blow drying and tied her hair back. However, while her hairstyle appears natural, each loose end was meticulously chosen and let go. She also used a curling iron to add soft curls to them.

2011: During her “My Black Minidress” days, she went back to short hair. Yoon Eun Hye added texture and shape by applying hair wax and serum.

2012: She went with a natural look by emphasizing on her glowly skin. It’s been said that Yoon Eun Hye doesn’t bother going to a salon to get her hair and makeup done when attending movie premieres. Apparently, she also dresses herself for these events.

2012: Looking natural is a style Yoon Eun Hye rocks and loves. Earlier this year, she attended a fashion event looking lovely and elegant. She showed off a feminine hairstyle and kept her makeup to a minimum, which emphasized her clear skin.