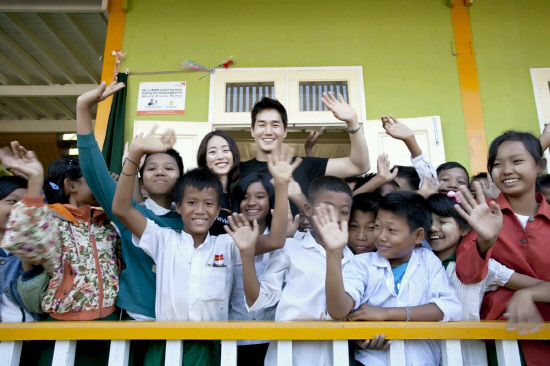 Celebrity couple Yoo Ji Tae and Kim Hyu Jin visited Myanmar on December 2 to celebrate their first wedding anniversary with children in need. According to a source, the couple is visiting the school that they have helped building in the past.

Previously, Yoo Ji Tae and Kim Hyo Jin donated a large sum of money they have received for their wedding to this school. Yoo Ji Tae’s agency CEO Kim Tae Eun also contributed along with Korea World Vision‘s budget in building the school for children in need. The school, located in Mandalay, now teaches approximately 400 students in elementary and middle school. The city is one of the poorest parts of the country with most of the students coming from low-income families.

Yoo Ji Tae and Kim Hyo Jin spent some quality time with the students during their visit. They planted “Dream Trees” with children and gifted them with necessary stationary goods. Yoo Ji Tae commented, “I decided to support the school because I wanted to help these children, who is in charge of a country’s future. I am very happy and content to see these kids studying in their new classrooms. I want to continue to support more children with educational opportunities.” Kim Hyo Jin also commented, “I was beyond nervous before meeting these students that I couldn’t even sleep. But now, their smiles gave me much strengths. I plan on supporting these children and their academic enthusiasm continuously.”

Even before their wedding, Yoo Ji Tae and Kim Hyo Jin have been steadily helping children in need. Previously, Yoo Ji Tae sponsored a children’s development center in Shar Yui Than with his agency CEO Kim Tae Eun in 2009. Also in 2009, he started helping two children in Mongolia through World Vision and donated all of his income from featuring his voice in a documentary film to the organization. He also visited Rwanda in 2011 with actor Ji Jin Hee and sponsored water pumps. He was appointed as World Vision’s honorary ambassador in 2011 and have been volunteering at the organization’s “Love Lunch Box Project” since 2010. Moreover, Kim Hyo Jin visited Sudan and Uganda in 2005 through “24 Hour Famine” and have been sponsoring 10 children internationally through World Vision. She was also appointed as the organization’s honorary ambassador in 2008.