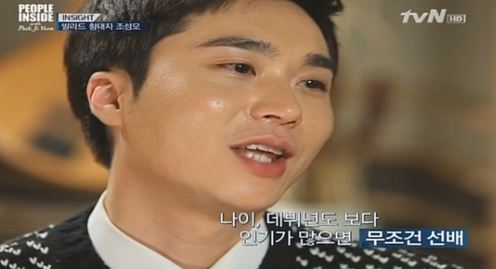 Jo Sung Mo: “I Ignored My Sunbaes’ Advice When I Was At The Top”

Ballad singer Jo Sung Mo, who made his debut in 1998, became one of the youngest and fastest accomplished musicians in the K-Pop scene. His first four albums sold at least a million units each and he was able to snag 2 Grand Prizes just a year after debut and grabbed several more the year after. He truthfully shared how he reacted to his sunbaes’ (seniors’) words when he was at the top of his game.

On December 5, he appeared as the guest on tvN’s “Baek Ji Yeon’s People Inside” where the MC started off, “A lot of people have said that ‘fame is like a bubble.’”

Jo Sung Mo responded, “I even thought during my peak that I will stay popular. As my popularity started to fade, it was a battle with myself. Right now, I’m a bit adjusted to it and am still adjusting. I’m learning just how trivial popularity, records and rankings are now.”

He continued, “When I was at my peak, I thought popularity was my sunbae. At that time, sunbaes warned that ‘popularity can quickly fade,’ but it didn’t go through my ears.” He shared, “Now, my vision is much different. I want to be an artist who makes a lasting impression on my fans.”

Soompiers, who’s at the top right now and who would benefit from his wisdom?

Jo Sung Mo
KPLG
Baek Ji Yeon's People Inside
How does this article make you feel?