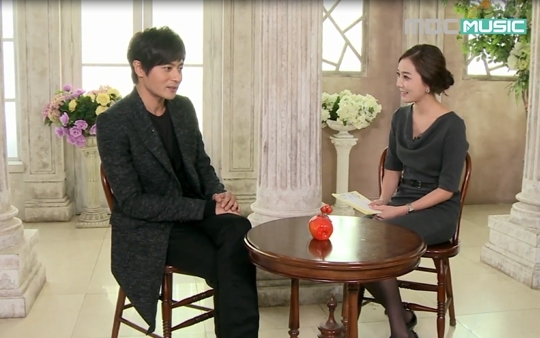 On December 6, Jang Dong Gun appeared on the first broadcast of MBC MUSIC’s “The Track,” where he had the opportunity to talk about his favorite tracks. Upon coming across Bach’s “Arioso,” the star began to talk about a book he read, titled “I Regret Marrying My Wife.”

Jang Dong Gun shared, “The controversial title is actually about the feelings of any man, who reaches 40, might feel. When I picked up the book to read it, I slipped off the cover in case other people in the bookstore might get the wrong idea.”

When he read the book, Jang Dong Gun learned of Bach’s “Arioso,” which he shared was his healing song. MC Lee So Yeon then asked, “If this is your healing song, do you also listen to it after you argue with your wife?” Jang Dong Gun answered truthfully with a laugh, “Yes, I do. Whenever I have an argument with my wife, I listen to this track.”

MBC MUSIC’s “The Track” is a talk show where celebrity come and talk about life events and memories related to their favorite music.

Jang Dong Gun
Ko So Young
KPLG
The Track
How does this article make you feel?