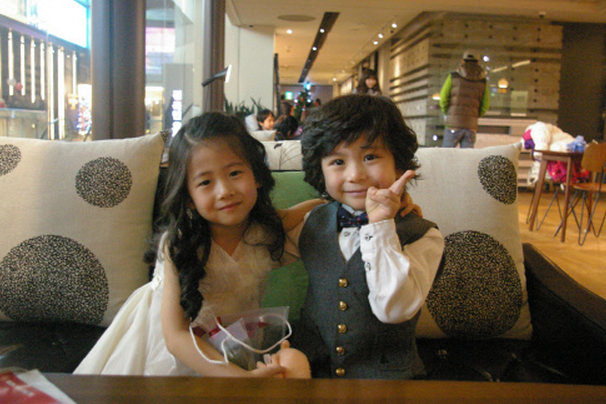 Child actress Park Min Ha was recently interviewed on SBS’s “One Night of TV Entertainment,” where she talked about her relationship with fellow child actor Moon Mason.  During the episode, she started, “It felt really nice when Moon Mason called me his girlfriend.” She continued, “Mason even bought me a gift from Canada. He’s really nice to me, and his younger brothers are so adorable.”

Her father announcer Park Chang Min added, “Mason’s family has three boys, and we have three girls. They’ve filmed together several times, and he’s also come over to our house several times. That’s how the two children got close.” When asked if Mason was really her boyfriend, the starlet replied, “He’s a boy, so he’s a boyfriend. He’s a friend that I like.” She also left a video message for her friend, “Mason, thank you for being nice to me. Let’s be good friends. Come over to my house.”

Earlier this week, Mason surprised everyone by confessing that he was in a relationship with Park Min Ha on the latest episode of SBS’s “1000 Song Challenge.”