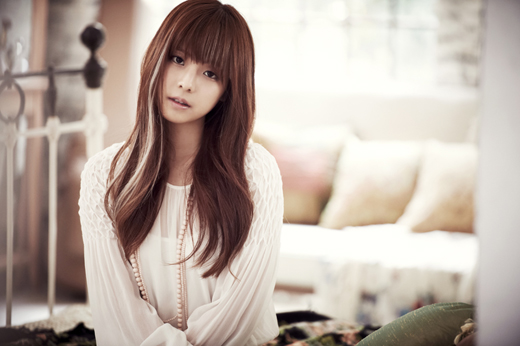 Big changes are taking place in the top 10 this week. The new No. 1 and 2 songs were not even in the top 10 last week. Juniel becomes the third consecutive female rookie soloist to score her first No. 1 song as “Bad Person” moves up from No. 13 to No. 1 this week. Together with Ailee and Lee Ha Yi, the trio seems to be front runners for this year’s best new artist awards, and they are the only three rookies to score a chart topping hit in 2012. Juniel had a long running hit “Illa Illa” this summer. “Bad Person” is from Juniel’s second mini album titled “1&1”. It is a nice pop rock ballad with additive melody.

Moving up 13 spots to No. 2 is singer-actor Lee Seung Ki’s latest hit “Return.” This song is actually No. 1 in most Korean charts but lack scores in networks as Lee Seung Ki has not performed this song on stage yet. Still, it came very close and was only 8.5 points behind the No. 1 song. It has a great chance to become the new No. 1 next week. Lee Seung Ki is yet another male soloist who has a strong showing on the chart this year. On his latest mini-album “Fores,” Lee Seung Ki has joined hands with indie singer songwriter, Epitone Project. “Return” is Lee Seung Ki’s signature style ballad and listeners will be able to hear the addictive melody and beautiful lyrics on first listen. Anyone can relate to this song which is about reminiscing about one’s happiest days and past.

There are three other new songs in the top 10, two of those are brand new entries to the chart. At No. 6, rookie Lee Ha Yi is coming back for her latest hit “Scarecrow.” This song replaced her former No. 1 song “1,2,3,4”. This JYP written R&B ballad is his latest collaboration with YG Entertainment artists. Lee Ha Yi does a great job bringing out the lyrics with her deep and mature vocals well beyond her young age.

The last two new songs in the top 10 this week belongs to two popular boy band members who has successfully ventured into solo artist for the first time with a different image. Moving up 12 spots to No. 7, Infinite’s leader Kim Sung Gyu has his first solo top 10 hit “60 Seconds.” Unlike the group’s dance hits, Kim Sung Gyu brings a pop rock style for his solo debut to the delight of his fans. This is the title song of Kim Sung Gyu’s first min-album appropriately titled “Another Me” to emphasize his change of style from Infinite. It is composed by the same songwriting team who has written many hits for Kara and Infinite. The song is about falling in love and breaking up with a lover both within sixty seconds time.

Debuting at No. 10 is BEAST’s main vocalist Yang Yoseob’s “Caffeine.” He is also showing a different image as he goes for a ballad style that will showcase more of his vocal. “Caffeine” is the title song of Yoseob’s first mini-album “The First Collage.” BEAST teammate Yong Jun Hyung lends a helping hand on this song where he is involved in the production and also in charge of the rapping part. “Caffeine” holds lyrics about a man who misses his lover who has left him. The guitar melody and the singer’s vocals harmonize well in this song.

Comments: Younha (full name: Go Youn Ha) is a female soloist first debuted in Japan and back in Korea late 2006. Due to her ability to play piano, Younha brings a very unique piano rock genre that is rarely seen in K-Pop songs at the time, and she quickly gained popularity. Her boyish image is also likeable by many fans. In the early years of her career, she has No. 1 songs like “Password 486” and “Telepathy”. She was quieter the last two years. “Audition” was her Korean debut song six years ago. This song quickly became a hit and lays the foundation of her subsequent chart topping hits.