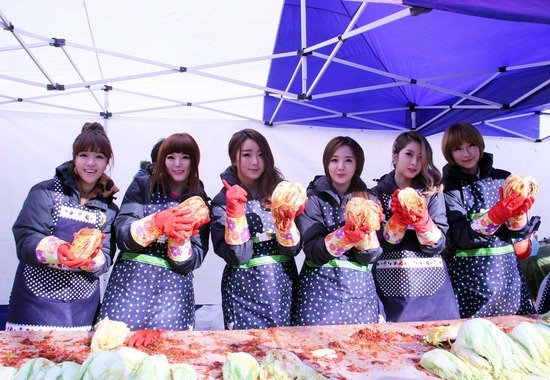 In the afternoon of December 8 at a community centre in Seoul, group Dal Shabet participated in the event titled “Let’s Make Kimchi for Low Income Families.”

Here, all of the Dal Shabet members put on aprons and vinyl gloves, and helped to make the Korean traditional dish Kimchi. They were awkward, but they impressed everyone by doing their best.

Officials of this event later revealed that despite the extremely cold weather, Dal Shabet members did not lose their smiles and were very helpful.

Dal Shabet stated, “We would like to thank you for inviting us to such a great event. We hope that the Kimchi we made today will be of help to others, and we would like to wish everyone good luck in the New Year.”

Meanwhile, Dal Shabet is currently promoting their fifth mini album “Have, Don’t Have.”