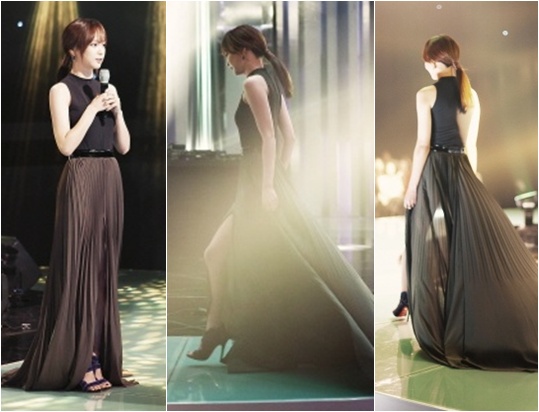 Yoon Seung Ah Is A Goddess On “Sold Out”

These are some pictures of actress Yoon Seung Ah wearing a see-through dress while shooting for the OnStyle fashion program “Sold Out.” This is the first time Yoon Seung Ah has become both an MC and judge for the show.

With a black chiffon dress, Yoon Seung Ah had the perfect allure of a goddess. There is even a word of mouth that the audience and the staff on scene could not take eyes off of the beautiful actress.

Yoon Seung Ah has been very much a fashionista and started off her career as model, a step she had taken after being spotted on the street by an agency scouter. Throughout the show, she joined in the discussion about fashion outfits and items with fellow stylists and designer contestants on the show. On the fourth episode that was televised last week, the concept of Yoon Seung Ah’s outfit was “Indian Girl,” which gathered much interest from the netizens. “It’s fun to watch what Yoon Seung Ah is wearing every week,” said one netizen.

As well as her great fashion sense, Yoon Seung Ah is constantly praised for her calm judgment and smooth skills as an MC. On the third episode, the actress shed tears for an eliminated contestant, which showed softhearted side of Yoon Seung Ah.

On the other hand, “Sold Out” is a show that is currently very popular amongst designers and various people involved in the fashion industry. The program shows 12 designers and and their creations are reviewed by the judges. The competition is intense and “Sold Out” is all about a fashion survival reality show.

The finale winner takes home 100 million won and is given the chance to participate in the 2013 Vancouver Fashion Week. “Sold Out” is broadcast every Saturday at 11 p.m.

fashionista
The Moon That Embraces the Sun
Yoon Seung Ah
sold out
KPLG
How does this article make you feel?