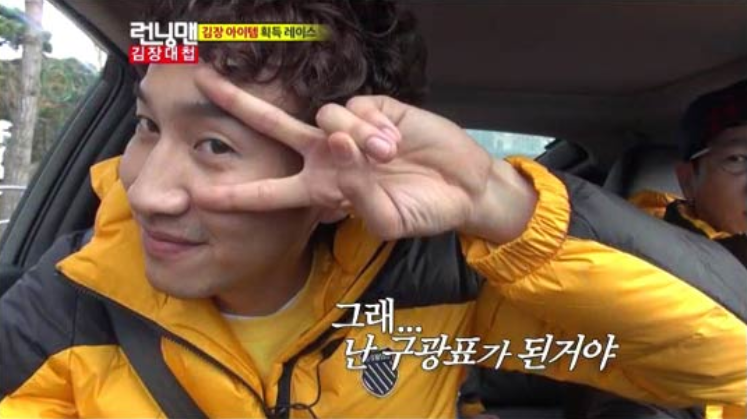 On SBS’s “Running Man” that aired on December 9, the members attempted to complete the mission titled “Kimchi Race.” During this show, Lee Gwang Soo showed off his own “Goo Joon Pyo style.”

Three teams were made for this mission. A member from each team, Han Hyo Joo, Haha, and Gwang Soo, were chosen to be left indoors to receive perms while the rest of the members were sent out to complete the mission.

When Gwang Soo’s team members, Song Ji Hyo and Ji Suk Jin, failed their mission, extra curly perm was given to Gwang Soo as a punishment. Other members started to laugh at him and Gwang Soo became upset.

However when they got into a car, Song Ji Hyo tried to make Gwang Soo feel better by saying, “You look like the character Goo Joon Pyo from the drama ‘Boys Over Flowers.’” Gwang Soo immediately regained his confidence. As he started to pose for his camera and repeat the scripts from “Boys Over Flowers,” the drama’s OST “Paradise” was played in the background, amusing the viewers.