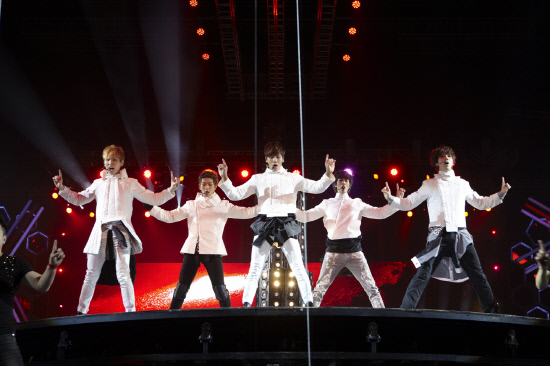 Idol group SHINee is continuing to gain popularity overseas in Japan, Taiwan, Hong Kong, and now even in Singapore.

On December 8, SHINee held a successful and packed concert as a continuation of their “SHINee World II Concert” series.

The day before, when the members arrived at Shingapore Changi Airport, thousands of fans and the local media swarmed around them in order to catch a glimpse or take a picture of the super popular group. Even before the concert started the group was showing their immense popularity overseas.

At the concert, the group performed their hits like “Love Like Oxygen”, “Ring Ding Dong”, and “Sherlock.” They ended up performing 29 performances during the concert including their individual performances. Each stage and performance was bright and charismatic, which only SHINee can deliver and the fans reacted with explosive cheering.

Even though the songs were in Korean, their foreign fans cheerfully sang along and even shouted the official fan chants. They also celebrated Cho Minho (Dec. 9) and Onew’s (Dec. 14) birthdays with the fans with a special celebration. You can read a Soompi review of the concert here.

Meanwhile, SHINee will continue their Japanese promotion and release their single album, “For 1000 Years, Always Be By My Side…” on December 12. You can check out the music video here.