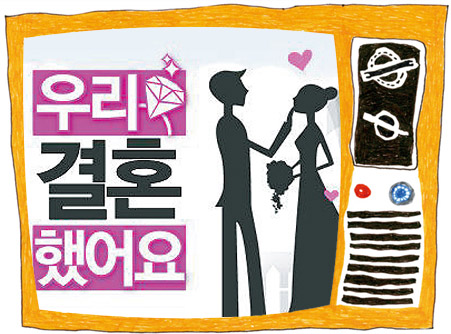 [Ceci] Who’s Your Date Coach? Dating Tips Via “We Got Married”

If you say something without thinking, you’re just asking for a breakup. But, then what should you say and how should you say it? Are some things better left unsaid? Oh, why is dating so hard? Or, is it? Let’s take a look at the dating styles of the three “We Got Married” couples and see if we can learn a thing or two.. but first, the top 4 phrases guys hate to hear.
1. What exactly are you sorry about [to me]?
2. Are you really not going to do it because I said so?
3. You changed.
4. That’s the only thing you can think of?

Sunhwa’s Rules for Conversation in Dating
1. “Yea, I was a bit jealous.”
Key Point: Lets meekly admit when my man is cool.
2. “Did you hear him say that you’re loud? That’s absurd!”
Key Point: Lets save my man. Often!
3. “Don’t use this perfume when you’re out.”
Key Point: Lets be obvious that I’m “taking care of my man.”

Se Ah’s Rules for Conversation in Dating
1. “Make sure that he doesn’t do it again!”
Key Point: Lets cultivate his protective heart.
2. “But still, I’m really sad when you get a bruise.”
Key Point: It might seem small, but he will be moved if I’m sincere.
3. “I love you, protector!”
Key Point: Lets give my man strength. Even more so when we’re with other couples!

Yeon Seo’s Rules for Conversation in Dating
1. “Oh? I like that too!”
Key Point: Lets identify with my man!
2. “Chang Sun and Kang Min Hyuk are totally different! Of course it’s Min Hyuk!”
Key Point: Being hot and cold during dating makes the relationship sweeter.
3. “Well, hmm, should we change? Couples?”
Key Point: Lets remind him that I’m not an easy woman.