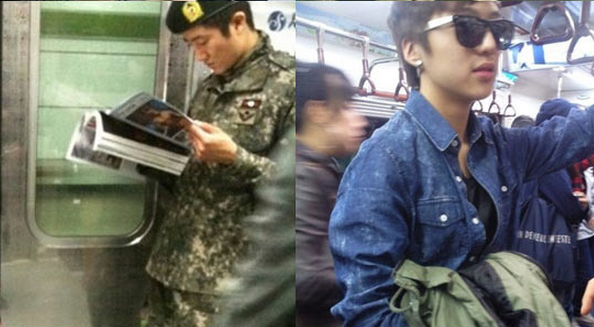 Photos of celebrities taking the subway have recently drawn interest from netizens.

Actress Moon Geun Young and Won Bin are dressed like ordinary civilians from head to toe in black. Still, their famous faces stood out in public to those surrounding them.

Actor Jang Hyuk and Lee Hyun Woo could not hide their handsome and noticeable profiles in public, assuming poses of actors.

Erik Nam from MBC’s “Star Audition 2” and Kim Young Kwang are both wearing visually appealing khaki pants in the subway. Kim Young Kwang who is currently a model, drew attention public attention to his long legs.

Epik High‘s Tukutz reads a book while riding the subway in a military uniform, while singer Kang Seung Yoon wears sunglasses to hide his face.

Comedian Song Hae is wearing casual clothing while signing an autograph for the passenger seated next to him. He assumes a neighborhood grandfatherly pose.

Netizens who saw the photos commented, “Wow, I guess celebrities use the subway too,” “Song Hae Grandpa is the best!” “Won Bin is such a visual all-kill,” and “I guess you can’t hide the fact that you’re a celebrity on the subway either.”