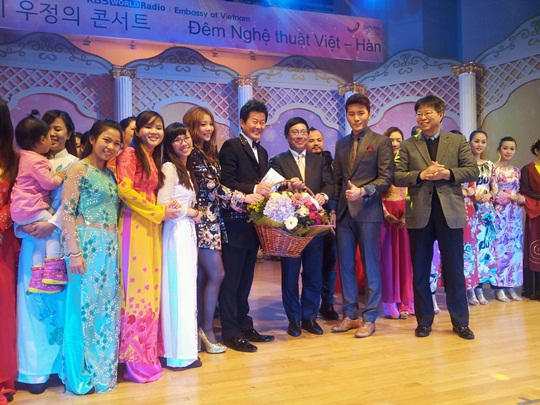 At the “Friendly Concert In Celebration of Korea-Vietnam’s 20 Years of Diplomatic Relations,” which took place on December 8 at the KBS Radio Hall, the three singers staged an outstanding performance which was then thanked with the awards and immense flower bouquets.

Upon receiving the award, Tae Jin Ah expressed, “Thank you for this great flower bouquet. I hope that our two countries can further advance on the cultural ladder and that we keep on helping each other just like we have done until now.”

At the concert, there were several widely known Korean and Vietnamese singers present, and both the audience and singers appeared to have a good time. Tae Jin Ah performed “Companion,” “Love Someboy One,” Eru sang “Black Glasses,” “I Hate You,” and Ailee staged “I Will Show You,” and “Crazy In Love.”

Also, it is planned that Eru will fly over to Vietnam next February and March for his private concert.