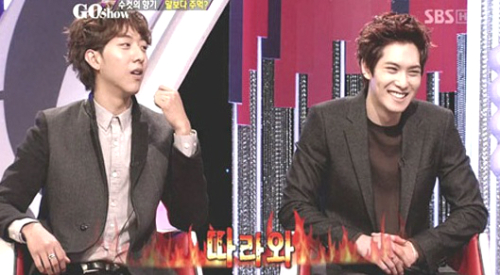 CNBlue Members Reveal That They Fight With Fists

CNBlue members confessed recently that there have been times when they have fought.

On December 14, CNBlue made a guest appearance on SBS‘s “Go Show” where they shared many interesting details about the members and their relationship with each other.

Of particular interest was Lee Jung Shin‘s story about his dispute with Lee Jong Hyun. He said, “There has been a time when I fought with Lee Jong Hyun. I kept insisting on keeping the bass tone I wanted to play and things escalated from there until Lee Jong Hyun suddenly told me to follow him. We ended up in the bathroom where he struck me three times.”

He went on, “After I was struck, I was immediately sorry. I even thought to myself, ‘Was it really important that I had to play that base tone today?'”

Lee Jong Hyun chimed in saying, “It was before we performed, and I like to settle things right away. I don’t like it when things build up, so as soon as things escalate, I like to take action and solve it right there.” Jung Hyun Don commented, “It seems like only Lee Jong Hyun found resolution,” causing everyone to laugh.

Netizens who learned of the incident commented, “They’re charming since they can be so silly at times,” and “Lee Jong Hyun and Lee Jung Shin are hilarious.”