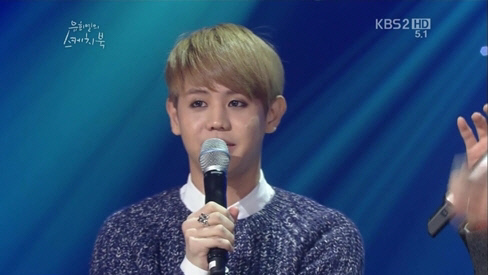 BEAST’s main vocalist Yang Yoseob did something that the group has not yet accomplished on our chart so far in their career – to have a No. 1 song. Yoseob’s “Caffeine” moves up nine spots to the top in just its second week on the chart, easily defeating last week’s No. 1 song, Juniel’s “Bad Person.” BEAST came close this summer with “Beautiful Night” hitting No. 2. If not because of “Gangnam Style,” that song would have been No. 1. Yoseob makes up for that on the second last chart of this year.

Lee Seung Ki’s “Return” is again topping most of the music charts in Korea but moves down a spot on our chart to No. 3 due to his lack of performances on music shows. If this song scored some points in Inkigayo for performances it would have been a close battle against “Caffeine.”

There is only one new song in the top 10 this week. Korea’s top modern rock band Nell is back with a three part series of titled “Gravity.” The first part, “Holding Onto Gravity,” has four tracks. The title song “White Night” is a mid-tempo rock ballad and was written by Nell’s lead singer Kim Jong Wan. This week it debuts at No. 10. The song is about the mental state of staying in one place as if gravity was pulling a person back. Nell’s unique sounds can be heard through this representative track.

Note: Stay tune for our annual Soompi Gayo Awards which again will take place at December 31. The nominees will be announced this coming week. This year fans will be an even bigger part as we are adding netizen awards for the most popular singers of each category (except new artists). These awards will base purely on fan voting. Get ready to cast your vote!