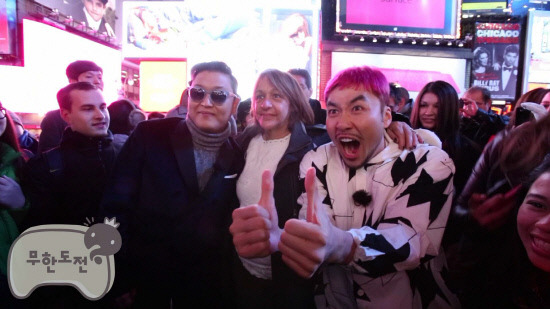 PSY Gets Bombarded by Fans in NYC

On the “Infinity Challenge” that was broadcast on December 15, No Hong Chul actually saw with his own eyes how popular PSY has become worldwide when he went to New York for the calendar delivery.

The two went to Times Square; and before they arrived at their destination, PSY expressed his nervousness in that maybe the people would not recognize him. “There are great days and bad days. I want to say that it happens randomly. Today may be a bad day,” said PSY. He jokingly continued, “On bad days, I wear sunglasses in the hopes that people can recognize me from the music video.”

Contrary to PSY’s worry, everyone clapped and recognized the singer. Suddenly, PSY was surrounded by his New Yorker fans and was bombarded with photo and autograph requests. No Hong Chul helped out by snapping away with fans’ cameras.

When people were confused as to who No Hong Chul was, he showed them the elevator dance, which was when they recognized him. Some did their own impressions of the dance as well.

Infinity Challenge
New York
PSY
KPLG
No Hong Chul
How does this article make you feel?