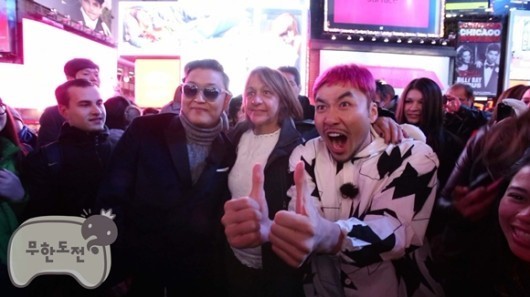 No Hong Chul Reunites with PSY in New York

Comedian No Hong Chul met up with PSY in New York City.

On December 15, the members of “Infinity Challenge” went to different areas to promote their “Infinite Challenge” 2013 Calendar as part of their mission. Before they each went their ways, the members gathered together on their website and designated overseas locations for each of the members.

Newlywed HaHa fulfilled his duties at his hotel during his honeymoon in Vietnam with a little embarrassment. However, as he did his mission with the help of his new wife, it became a heartwarming scene. Jung Hyung Don had difficulties with his flight and the bad weather, but he made it to Moscow and delivered the calendar to the natives successfully.

No Hong Chul was sent to New York where he met up with PSY. To meet up with No Hong Chul, Psy had even taken a helicopter to get to New York. The two then had a reunion and a recognition test in the streets of New York.

This special international episode of “Infinity Challenge” aired on December 15.