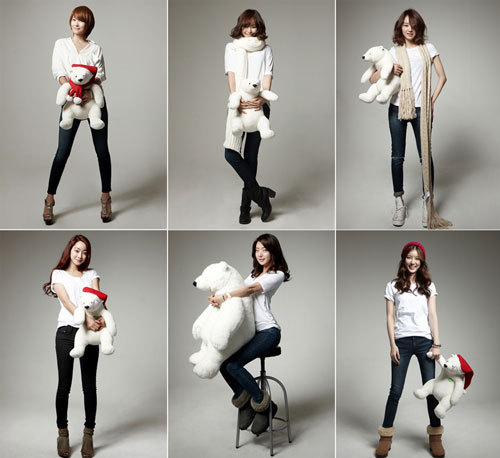 King Kong Entertainment actresses took part of the “Save The Polar Bears” project by donning classic white tees and jeans while clutching adorable stuffed polar bears. In the photos, the actresses succeeded in exuding a lovable and fresh aura despite wearing just a simple pair of jeans. Netizens were especially drawn to the shapely legs of the actresses.

Kim Sun Ah showcases her photo shoot experience with her natural smile and strong confident stance. Lee Ha Nik and Jang Hee Jin sport short wavy hairstyles with scarves, capturing the hearts of men everywhere with their unique personalities captured in each shot. Suh Hyo Rim looks innocent and radiant with her flawless skin and shy smile while Song Min Jung shows off her S-line figure with a larger stuffed polar bear. Han Ji Wan is wearing warm UGG boots and holds her polar bear the way an adorable toddler would with one hand.

This hasn’t been the first time that celebrities have donned the classic white tee for showcasing beauty in simplicity. Female idols groups such as Girl’s Generation has also selected white tees for a sexy yet adorable look as well.

Netizens who saw the photos commented, “It’s a gathering of people dressed in white tees and jeans!”, “I think they all should get insurance for those amazing pairs of legs”, “King Kong actresses have beautiful and shapely legs!”, “I wish I had a stuffed bear like that too~!”, “All of you overflow with such charisma”, “The selfish me just wants legs like yours!” and “Is this a gathering of the “Nation’s Beautiful-legged women?”

Here are other photos of famous faces from King Kong Entertainment and others you might recognize who have joined the “Save The Polar Bears” movement!