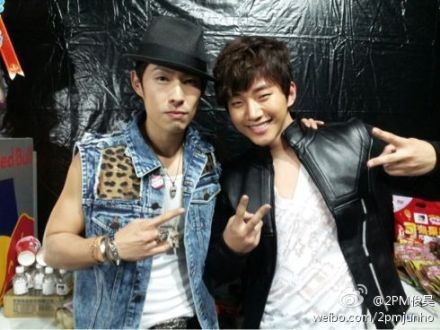 On December 16, Junho tweeted, “With Vanness. Thank you for coming” and uploaded a photo of the two stars.

In the photo, Junho and Vanness are throwing up peace signs and looking trendy in matching cut off vests of jean and leather material. They seem to have a great friendship seeing as how Vanness has a chummy arm around his pal Junho whom he came to support at the venue.

Netizens who saw the photo commented, “Wow, Junho gets to even take a photo with someone from F4?” and “You both are so handsome.”

In other news, 2PM recently held a concert in Taiwan as a part of their Asian tour “What Time Is It” on December 15 as the final leg of their trip.

2PM
F4
Junho
KPLG
Vanness
How does this article make you feel?