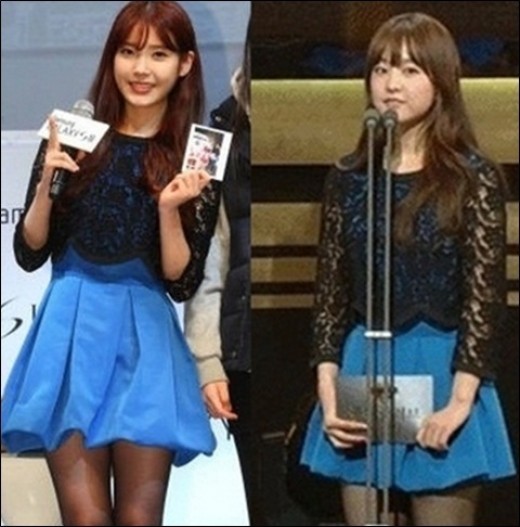 Who Wore It Better: IU vs Park Bo Young

On December 15 on an online community, photos of singer IU and actress Park Bo Young were released.

In the pictures are IU and Park Bo Young wearing the same outfit. They are wearing a black lacy top with a bright blue skirt. Even their hair styles and the color of the stockings are the same, surprising many of their fans.

IU has worn this dress on December 14 at the “Galaxy S3 Fan Meeting,” while Park Bo Young wore it at “2012 Baseball Golden Glove Awards” that took place on December 11.

Netizens who saw these pictures replied, “Both IU and Park Bo Young look great in this outfit,” “It’s funny how they ended up in the same outfit around the same time,” “Two ‘Nation’s little sisters’ in the same dress,” “Only these two would be able to pull this outfit off.”