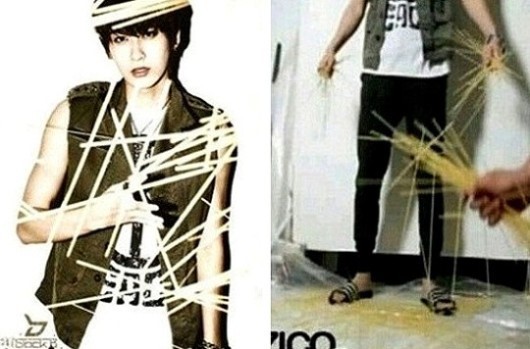 Recently on an online community bulletin board, two pictures were released under the title, “The secret behind idol photoshoots.”

The pictures are of group Block B’s Ahn Jae Hyo who did a photoshoot for the 2013 calendar.

The first picture shows the actual photo from the calendar. Ahn Jae Hyo looks exotic with the strings of lights around him. The next photo, however, shows what took place at the photoshoot. It reveals that the special effect the director used were spaghetti noodles. Also, although Ahn Jae Hyo is wearing a stylish top, he is wearing a cheap pair of old slippers on the bottom.

Netizens who saw these pictures replied, “This was the secret to idol photoshoots,” “I guess the pictorial pictures and how it looks in real life are two very different things,” “This is cool,” “Who cares as long as the photo turns out great.”

Block B
KPLG
ahn jae hyo
How does this article make you feel?