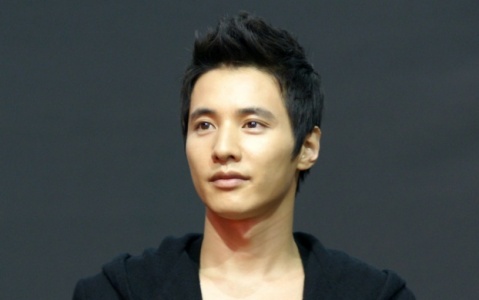 Won Bin Gets Sweaty Armpits Too

Netizens couldn’t help but laugh when they noticed that sexy actor Won Bin had a distinct sweat stain near his armpit in one of his advertisement shoots. The photo has been circulating online community forums and drawing a lot of attention with the caption: “Won Bin’s armpit sweat stain.”

Won Bin served as an endorsement model for Hite beer, and the sweat stain that could have easily gone unnoticed as a darker shadow formed naturally by a crinkled white shirt. However, the actor was unable to escape the netizens’ sharp eyes and fell victim to the heat during the shoot. With his stylishly swept hair, heart-dropping smile and suave raise of the beer bottle- the actor still manages to look drop-dead gorgeous while enjoying a beer outside his trailer.

Netizens who saw the photo commented, “I guess Won Bin is a human after all”, “Won Bin hasn’t had an embarrassing photo until now. It’s the shirt’s fault”, “The shirt is crying. That is not Won Bin’s sweat stain” and “They must have photoshopped that sweat stain on there so he would seem more human.”

Won Bin
KPLG
How does this article make you feel?