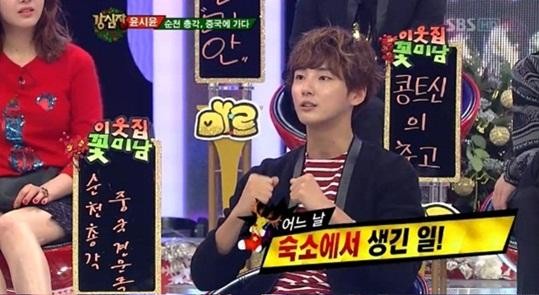 Actor Yoon Shi Yoon shared his story of how his poor Chinese caused a big ruckus at a hotel in China.

On December 18, Yoon Shi Yoon was a guest on “Strong Heart.” He started off his story by saying, “I have some advice for everyone who is traveling to China.”

He said, “First, don’t come to a hasty conclusion. Also, you must not just say whatever comes to mind,” and “One time, I said I liked sushi rolls and then I had to eat sushi rolls over 80 times.” Yoon Shi Yoon continued, “A really big thing happened at a hotel once. At the time, I was furiously studying my conversational Chinese book in China. So I thought I should put my Chinese skills into practice.”

One day, Yoon Shi Yoon decided to go work out when he ran into a hotel cleaning lady. He thought this would be the perfect time to practice his Chinese. He said, “Before then, my manager or the translator took care of my laundry. But that day, I wanted to ask about it myself.”

He tried to string together a few words, and with body language, he thought he successfully gave the housekeeper his laundry. However, even after 2 weeks, Yoon Shi Yoon’s clothes were nowhere to be found, which sent the hotel into a frenzy.

“After making some calls, they said that I told them to throw out the clothes. The translator thought my Chinese was good, so he fought back and said there’s no way that could have happened. But it turns out I did say the wrong thing,” he shared.

Yoon Shi Yoon admitted, “It turns out the word I used was ‘die’ so the worker thought I meant for her to throw away my clothes,” as he ended his story.

Strong Heart
KPLG
Yoon Shi Yoon
How does this article make you feel?