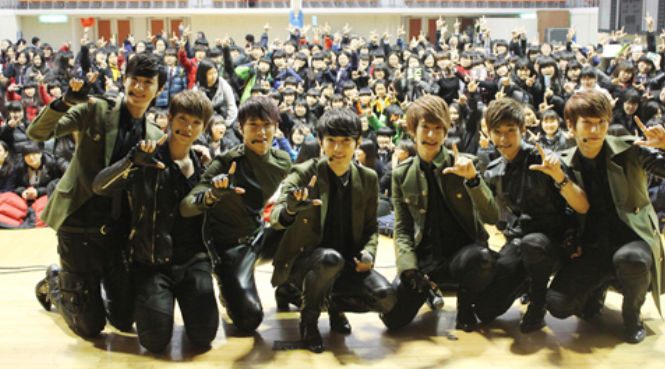 Group A-Jax is currently involved in the event titled, “Reply A-Jax,” where they travel to the schools that have requested their visit.

For this event, A-Jax has traveled approximately 1,000km in one month. They have visited various cities including Seoul, Daegu, and Kyungju, and have performed for over 3,500 fans.

The most requests were made from the city of Daegu, where A-Jax showed their appreciation by performing on the street in front of the Daegu mall. They first performed to their new song “2MYX,” then went inside for a meeting with hundreds of fans. The gathering took place in a clothing store of the brand name that A-Jax is currently promoting.

When A-Jax visited the city of Kyungsan on December 17, they visited a female-only middle school and high school for a mini-concert. During the performance, the students updated the progress via SNS to show their support.

Through this event, A-Jax hopes to promote their name and first mini album by personalizing their events for their fans. They also recently held a “free hug event.”

A-JAX
KPLG
2MYX
Reply A-Jax
How does this article make you feel?