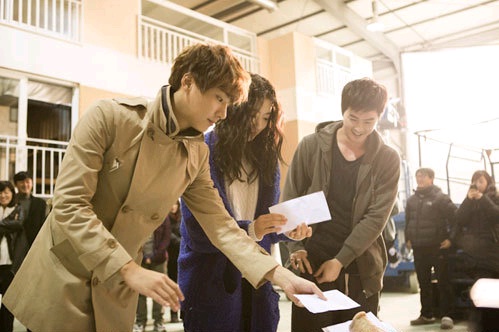 The cast of the upcoming drama “Flower Boy Next Door” created a sparkling atmosphere with their good look at a ceremonial offering for the drama’s future popularity. The production company, Oh Boy Project, released pictures of the cast of the tvN drama that will air on January 7.

The ceremonial offering happened on December 17 in the city of Paju. All of the cast and crew, including the leading actors Yoon Shi Yoon and Park Shin Hye, participated in the ceremony. Over 100 cast and crew members gathered to pay an offering and pray for the success of their drama.

The main cast including the two leads, Kim Ji Hoon, Park Soo Jin, Go Kyung Pyo, and Mizuta Kouki started the ceremony by placing money envelops near a pig’s head and the rest of the staff and crew followed.

Despite the fact that it was not easy to gather all the staff and crew together, the “Flower Boy Next Door” team showed a friendly and caring relationship with one another, making the atmosphere at the ceremony harmonious.

A member of the crew said, “At the ceremony it felt like the cast and crew were all of one mind. Just as we work hard to shoot in the cold weather, we all want to work diligently and passionately to make this comedy drama a success.”

“Flower Boy Next Door” will be about a modern day Rapunzel whose life changes after a group of handsome “flower boys” move in next door.