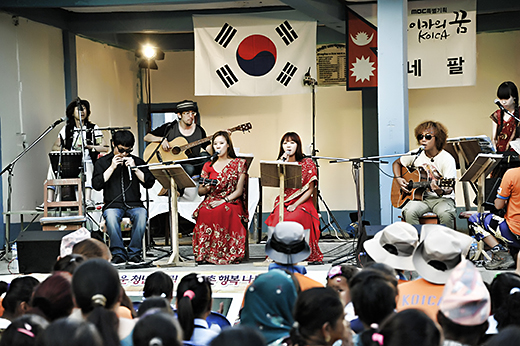 Some of Korea’s famous musicians came together to open an acoustic music show in Himalaya, Nepal.

Kokia’s dream team collaborated to conduct a music concert in the woods for the children and civilians of Nepal. The show is scheduled to be broadcasted December 25, on MBC’s Christmas special entitled, “Bless Nepal’s Concert.”

For this particular event, actor Kim Jung Tae showed off his singing skills with Lee Moon Sae’s “When Autumn Comes”. Female trio Narsha, Horan and Mang Yoona performed Jackson Five’s classic song “I’ll Be There,” and their beautiful harmony lit up Nepal’s night sky. The group also performed Nepal’s one and only traditional folk song “Raessunbbiriri” together with local traditional instrumentalists, setting up a special stage.

Behind-the-scenes footages in the making of the “Bless Nepal’s Concert” Christmas Special will be presented through a special music documentary, recording the very steps of Kokia’s Dream and their journey preparing for this event. The show will be broadcasted on December 25 at 12:40pm KST.