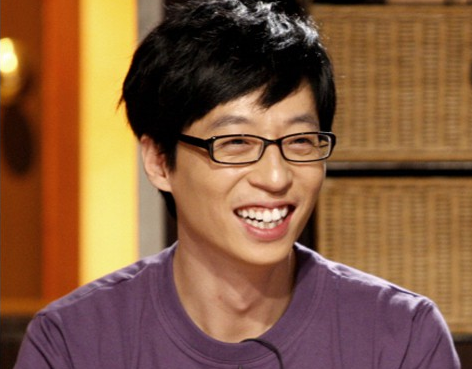 The “Nation’s MC,” Yoo Jae Suk, was recently caught using a “naughty hand” on a show program by netizens.

Yoo Jae Suk, along with Jung Hyun Don, Park Sang Myun, Ryu Dahm and Shin Dong – collectively known as the who “5 stars” – emceed the most recent episode of SBS’s “Running Man.” Dressed in matching comical, flowery swimming caps, the participants were asked to play a game where they had to balance themselves on a floating balance beam and switch places when asked. The objective of the game was to not fall off the beam.

When MC Yoo Jae Suk noticed that Gary was in danger of falling into the water, he grabbed Gary’s pants without thinking and saved him from getting eliminated. The sheer image of the MC grabbing onto Gary’s bottom set the viewers in uproar of laughter.

Netizens who caught the screen capture of the hilarious turn out of events had a ball making fun of the MC, “I’m disappointed in him~”, “That was so funny!” and “In order to win you have to strategize. Amazing.”