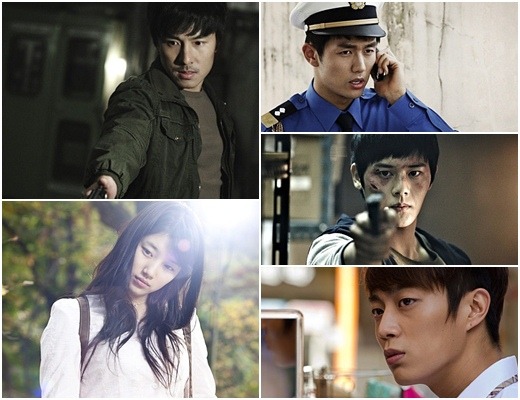 There was a time when it was a big deal when a singer also became a film actor. Now in 2012, there is a term called “Acting-dol” (short for an idol who also acts). Already, there are quite a few idol singers who are breaking into the film industry, and we can expect more idols to do so in the future.

Some of the idols that made a breakthrough in acting this year were miss A’s Suzy in “Introduction to Architecture,” Shinhwa’s Kim Dong Wan in “Deranged,” 2AM’s Im Seulong in “26 Years,” UKISS’ Dong Ho in “Don’t Cry Mommy,” and JYJ’s Kim Jaejoong in “The Jackal is Coming.” These idols played a variety of characters from female students to rapists in a variety of genres including comedy, melodrama, and action.

There was also a variety in the audience reviews. Let’s take a critical and unbiased look at some of the performances from this year “Acting-dols” and see which idols truly earn the title of “film actor.”

In the science fiction horror thriller “Deranged,” Kim Dong Wan plays a homicide detective who works with his older brother to save his family from a parasite that control people’s brains. Although he had to act alongside veteran actor Kim Myung Min, Kim Dong Wan held his own weight and gave a commendable performance.

The box office results for this film was surprising. Although “Roundkick” only had 40 thousand viewers, “Deranged” collected 4.5 million viewers. It is a shame that it did not hit 5 million, for Kim Dong Wan had promised that if the movie received that many viewers he would do one-handed push-ups in the middle of Seoul.

Suzy of mss A debuted as an actor in the KBS drama “Dream High” and received criticism for her awkward dialogue and stiff expressions.

However, with her film debut “Introduction to Architecture,” she earned the title as “Nation’s First Love.” She played the twenty-year-old character perfectly with the right amount of innocence and spunky charm. Of course, the character did not require deep and intense acting, but Suzy gave a cute and energetic performance that was right for the character.

Im Seulong had a special film debut. The film had been delayed for over four years due to political controversy, thus also delaying the singer’s acting debut.

The film takes place during the Gwangju Civil Uprising, and Lim Seulong plays a young man, who dreams of revenge after seeing his sister killed right in front of him, but is unable to act in fear of losing his job. Im Seulong showed a very different character in his comical and exaggerated role in the drama “Personal Taste.”

While he was limited in his expressions, he did not interrupt the natural acting flow of the rest of the cast’s acting and received an acceptable review.

Kim Jaejoong in “The Jackal is Coming” – Hallyu Star Playing a Hallyu Star, What Went Wrong?

Kim Jaejoong has already established himself as a drama actor in roles in “Protect the Boss” and “Dr. Jin.” However, it seems that the movie “The Jackal is Coming” did not fully take advantage of the real-life Hallyu star. In the movie, Kim Jaejoong was neither funny, cool, nor did he have a personality.

It was a shame because viewers had high hopes to see the singer’s charms in this comedy. Although in the movie he was beaten, threatened, and even had a kiss scene with a woman who was nineteen years his senior, “The Jackal is Coming” ended quickly without a sound.

Dong Ho in “Don’t Cry Mommy” – Too Ambitious of a Role?

Audiences for “Don’t Cry Mommy” did not seem sure if they should burst out laughing or frown in scenes with UKISS’s Dong Ho. Although she did not have a big role, Nam Bo Ra’s intense acting raised the standards the audience had for Dong Ho’s performance. In the scene where he begs for his life as he is held at knife point by a mother who lost her daughter, there is no tension at all.

However, the fact that an idol took on the challenge of portraying a rapist should be acknowledged and commended.

It seems that 2012 was the year for ZE:A members to take on acting challenges. Following Im Si Wan in “Moon That Embraces the Sun” and Hwang Kwang Hee in “Marrying the Mafia 5”, Han Ga In’s male look-a-like Kim Dong Joon made his screen debut.

Perhaps because this was his first acting role, Kim Dong Joon’s portrayal of a part-time hit-man was somewhat awkward and unnatural. However, his top-notch action scenes made up for whatever was lacking in his acting.

Yoon Doo Joon of BEAST debuted in the drama “All My Love,” and now took on the challenge of acting in a movie. Along with ZE:A’s Hwang Kwang Hee and APINK’s Son Na Eun, he had a role in “Marrying the Mafia 5.”

In short, Yoon Doo Joon consistently had a rather bitter look on his face despite the fact that he did not have much screen time. Hwang Kwang Hee simply tried to pick a fight with Yoon Doo Joon with his high pitched voice, and Son Na Eun did not make much of an impression at all.

To be fair, the three rookie actors were sharing screen time with Korea’s favorite actors so we can only hope to see their true potential in future works.