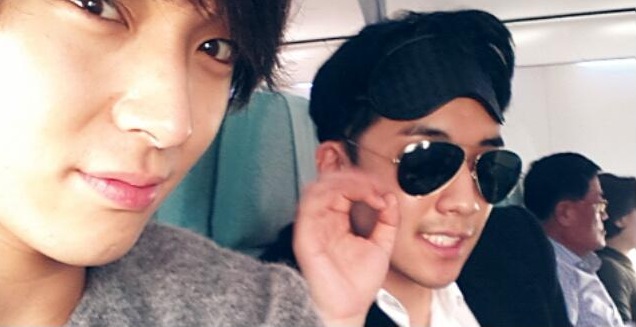 On December 26, FT Island‘s Jong Hun posted on his twitter, “V.I. I love you” and included a picture collage.

Jong Hun took all 4 pictures inside the airplane. Just like any other great friends, they look comfortable with each other. Jong Hun tries to be sneaky in the upper left picture, but looks like Big Bang‘s Seungri caught on because he doesn’t look super thrilled in the lower left picture. Since he can’t avoid it, Seungri decided to join in on the action and after a failed attempt in the upper right picture, took a successful “I’m Ok” picture on the bottom right.

Netizens who saw the pictures commented, “They look like they’re really good friends,” “Spending Christmas together, they must be close friends,” Jong Hun and Seungri proved their celebrity best friends,” “These two are full of playfulness. Cute.”

Meanwhile, it’s been revealed that the two best friends went to Bangkok together to spend their Christmas vacation.