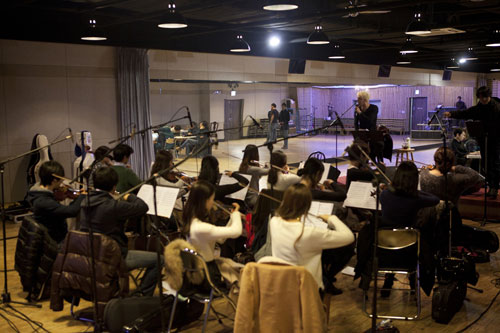 Photos of JYJ’s Junsu practicing for the live orchestra concert have been revealed by C-JeS Entertainment on December 27.

Junsu’s agency wrote, “Junsu is preparing very hard along with the music producers for the year-end concert. The concert will be 100% live performances. Junsu wants to express his thanks by holding this large-scale concert for his fans.”

In the photos, the singer is seen among string orchestra band including violins, cello, brass and chorus singers.

A staff who participated in the practice session told, “Junsu used various vocal techniques as well as beautiful song melodies. I am sure the concert will be successful and the fans will be amazed once again!”

“2012 XIA Ballad & Musical Concert with Orchestra” will be held on December 29 until 31 at COEX. Tickets for all three days have been sold out already and fans are anxiously waiting for the day to come!

Junsu
KPLG
How does this article make you feel?