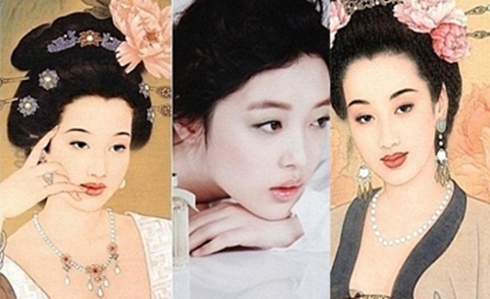 f(x)’s Sulli‘s striking resemblance to that of a gisaeng has been a trending topic among netizens. As of late, more pictures of Sulli have been pulled from online and have been compared to photos of gisaengs. From the shape of her eyes to her supple and soft skin complexion, everything about Sulli’s lovely features has been complimented and compared to that of beautiful gisaengs of the past.

As more photos have been posted, Sulli’s various charismatic features have been pointed out and become the object of adoration. Netizens praised Sulli’s oriental beauty in the latest compilation of photos comparing Sulli to great beauties in the past. Sulli’s beauty was enhanced by just a touch of makeup on her eyes, cheeks, and skin. The paintings of lovely women who look similar enough to be Sulli’s great-grandmothers re-establish Sulli as a beautiful woman of her time.

Netizens who saw the photos and scans of paintings remarked, “Sulli is an oriental beauty,” “They really do look alike,” and “That’s definitely Sulli’s doppelganger.”

f(x)
Sulli
KPLG
How does this article make you feel?