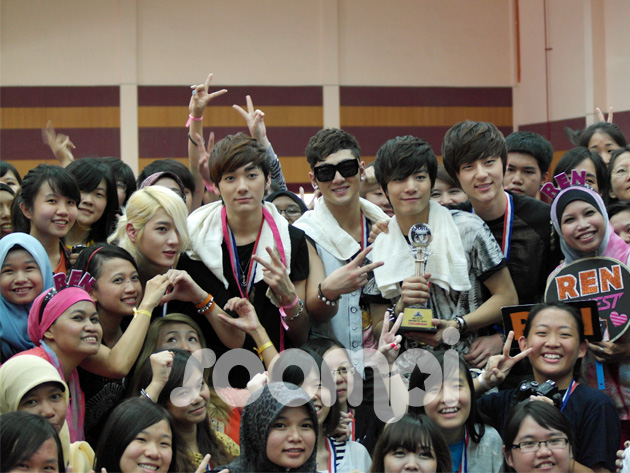 Rookie boy group NU’EST returned to Malaysia on December 15 for their first fanmeeting “The Face to Face in Malaysia.” It was their second visit to the tropical country and they were greeted warmly by L.O.Λ.Es who enjoyed two days of up close and personal interaction with members JR, Aron, Minhyun, Baekho, and Ren. Organized by Rhythm Land, fans who purchased Gold Pass tickets to the event were entitled to enjoy exclusive activities with NU’EST over the two days. Let us recap the fun times with the boys!

In the afternoon of December 16, L.O.Λ.Es played “Scissors, Rock, Paper” with the members. Fans were divided into five groups to have a go with the one of the boys. Winners get to go onto the second round that took place on stage.

During the second round, Baekho who kept losing to the fans drew alot of laughter from all around as his group mates couldn’t resist in giving him a few useful pointers!

After the mini-game session, all the fans lined up to receive their one-on-one group photo with NU’EST. The boys allowed themselves to be hugged tightly and touched (see the hand on Baehho’s chest, haha!), most fans form heart signs with their favorite member while several L.O.Λ.Es made quirky poses that made the boys laughed. Soon it was time to end the exclusive session, but fans’ spirits were still high as they look forward to the showcase coming up later that evening.

At the showcase, NU’EST performed a total of six songs including “Face,” “I’m Sorry,” “Not Over You,” “Action,” and “Sandy.” Donning reindeer and Christmas hats, they greeted Malaysian fans an early Christmas with a special rendition of a Christmas song in Korean.

Lucky fans at the showcase also got picked to do some “tasks” with NU’EST. Minhyun had to sing a love song, Ren had to act cute for the fan, Baekho had to give the fan a back-hug, JR had to perform a sexy dance and Aron got to take a selca with the lucky fan. In the second game, five more lucky fans (did I mention those who were picked were all girls?!) got to do catwalks with one of the member! I bet all of them slept with huge grins on their faces that night and for many more nights to come!

The showcase came to a happy end when all the fans, and even friends from the media, received high-fives from all the members.

The second day of the exclusive activity took place on the morning of December 16. Designated as “Sports Day with NU’EST,” fans arrived in sporty gear and all were ready to have another wonderful day with NU’EST. Fans were divided into five teams again each with a different color ribbon assigned to their team. When NU’EST arrived at the venue, they each picked a color ribbon from a box and joined their team for group photos.

Aron leading the pink team, demonstrates how the first game should be played.

Minhyun cheering his blue team for the 3-legged race.

Baekho tying the ribbon for his team. The other boys did too!

Baekho fanning his green team to cool them down after his team lost out.

JR, Baekho, and Ren putting on medals for fans from the winning team.

A happy group photo with all the fans!

JR’s white team beat Minhyun’s blue team in the final game of musical chairs. The winning team’s members all received a medal handed out by NU’EST. A lot of sweet memories with NU’EST were created in a short two days, but for many L.O.Λ.Es, I’m sure these memories will last a lifetime.

Many thanks to Rhythm Land for inviting Soompi to be a part of the exclusive media team! We still have an exclusive interview with NU’EST, coming up soon! Be on the lookout!

NU'EST
Baekho
JR
Pledis
Minhyun
Ren
The Face to Face in Malaysia
L.O.Λ.E
Aron
How does this article make you feel?