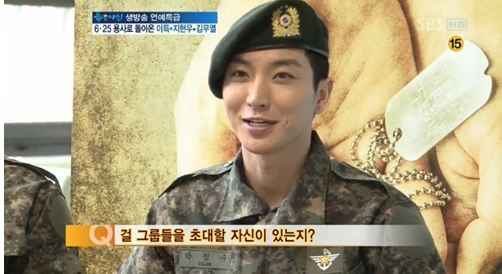 On December 31, he made a special guest appearance on SBS’s talk show “Good Morning” where he shared that he’s not able to contact girl groups since he started serving in the military.

On this day, he appeared with other celebrities Ji Hyun Woo, Kim Mu Yeol and Jung Tae Woo and they shared about their army life. These men are currently preparing to perform in the musical “The Promise,” which will be available from January 9 to January 20.

Jung Tae Woo said, “I’m almost finished serving in the military, but Leeteuk and Kim Moo Yeol have a long ways to go.” He also added, “I’m looking forward to the girl group performances. Leeteuk said that he’ll invite them.”

Leeteuk shared, “I can’t contact girl group members after joining the army. It seems like they changed their numbers.” He added, “ I need to try harder,” making everyone in the studio laugh.