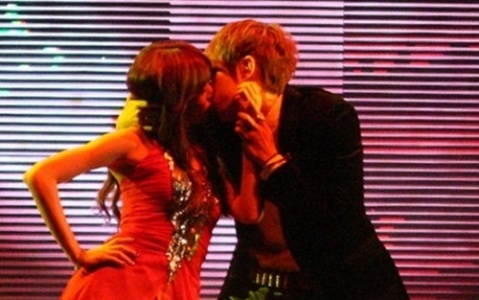 K-Pop’s Sexiest and Dirtiest Moments of 2012

2012. Ah, how I will miss thee! In the world of K-Pop you gave us Gangnam Style that rocked the world. For a moment, K-Pop actually was big and not just inflated as it usually is -teehee. Anyways, although there are many ways to remember 2012, I would like to do it, by looking back at some of the sexiest moments! (The ones that I think are sexy at least) ENJOY!

WOOOPS! Well, this picture caused some controversy because people thought it was a deliberate publicity stunt. Anyhooters, uggh that’s so wrong to say. But, here it is, all blurred up because it might not be safe for Soompi eyes!

I mean look, she was always beautiful and sexy. But I think Nana really shined in 2012. Cheers to her!

Something about a hot girl in lingerie eating fast food just does a number on me. What do you think?

6. Ga In in “Bloom” Music Video
So many things going on at once, what should I point out? The water spraying, realistic bed scene, and dance pole? Mind Blown.

Thank you for existing Son Dam Bi. You continued to give us beautiful pictures of yourself in 2012. Please continue to do so in 2013. For all of mankind!!!!

You know people were saying that the world was going to end in 2012. After seeing this picture, I didn’t care anymore. Thank you Suzy… Thank you…..

11. Lee Hyori Gets a Boyfriend, Then She Does This Photoshoot

Lee Hyori worried many after going official with her relationship. Would she continue to appear in sexy photoshoots? This was the answer.

12. NS Yoonji Playing Around with Microphone Stand in “I Got You”
Seriously, if that whole microphone stand dance isn’t aimed towards emulating you-know-what, then I’m a 7 foot rhinoceros with mad cow disease.

I don’t know what exactly gives off this “sexy” feel. But, something about this photo looks really steamy.

14. Stellar “Up-Skirt” “U.F.O” Teaser Clip
Remember this group and their song “U.F.O”? Probably not, but this teaser certainly made waves because of the uhhm for lack of a better word blatant “up-skirt” look we get as one of the members bend over.
15. Secret’s California Beach Water Park CF
Who doesn’t like water splashing all over the chests of female celebrities?

This list wouldn’t be complete without G.NA! She made a few waves when she smooched her back dancer while performing the song “2Hot.” I look forward to her activities in 2013!

I remember this slip! Almost forgot to add it in, thank you facebook commenter!

19. SHINee Jonghyun and Taemin Kissing.. Uhh…
WARNING! IF YOU ARE A STRAIGHT MALE TURN AWAY NOW AND HAPPY NEW YEARS!!!!!
For the rest of you, I felt bad because this was too “female-centric.” So here’s one for the ladies. Anyways, Happy New Years everyone!! I hope that the new year of the snake (2013) will be good for all of you. Live long and prosper!
Hyolyn
IU
SHINee
Suzy
Eunhyuk
Ga In
Goo Hara
HyunA
Jonghyun
Lee Hyori
miss A
Nana
Secret
SISTAR
Son Dam Bi
Sori
Taemin
Yoobin
G.NA
How does this article make you feel?