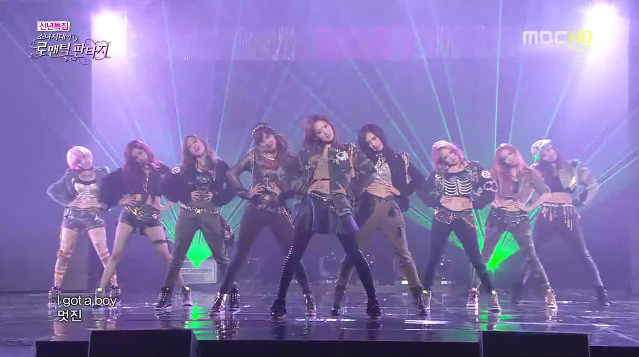 After revealing their music video for “I Got A Boy” and releasing their fourth album yesterday, Girls’ Generation also made their first comeback performances on their comeback special “Romantic Fantasy. ” Through the program, they revealed performances for songs from their new album, five of their past hits and other special stages.

Starting out the show, they performed tracks from their new album “Dancing Queen,” “Promise, ” and “Romantic St.” They followed that up with performances of their well known songs “Oh, ” “Gee, ” “Run Devil Run,” “Mr. Taxi, ” and “The Boys.”

For special stages, Jessica performed “Someday” featuring her sister, f(x)‘s Krystal on piano. Super Junior-M’s Henry joined Yuri and Hyoyeon for “I Am.” Tiffany showed off her cover of the popular song “Call Me Maybe.” Sunny, Sooyoung , YoonA and EXO came together for “Marry You.” Seohyun had a solo performance, covering Taylor Swift’s “Speak Now.”

Tiffany and Taeyeon performed their new duet song, “Lost In Love,” which is also included in their album.

To end off the show, the girls performed their title track “I Got A Boy” for the first time.

Girls’ Generation will make their first official music show performance this week on January 3 on M!Countdown.

“I Am” (Yuri and Hyoyeon feat. Super Junior-M’s Henry)