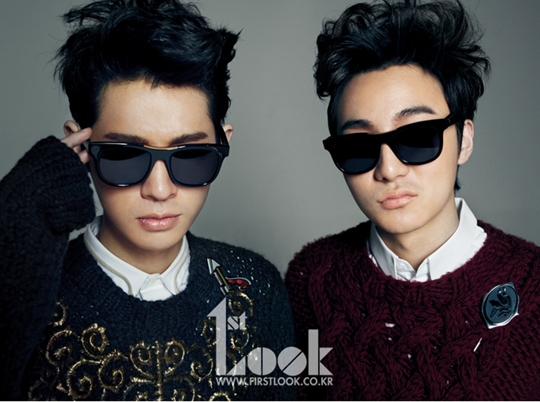 In the pictures the Super Star K4 winner Roy Kim sheds his innocent and sincere image to become a chic bad boy. Semi-finalist Jung Joon Young charismatically showed off his model looks. The eyeliner, slicked back hair, and the dark clothes make both boys look cool and tough.

In the accompanying interview Roy Kim said, “For the first time I am doing photoshoots, filming CFs, and being on TV and radio shows. I have other schedules besides singing but I am thankful that there are people who say they want to hear my music.”

His friend Jung Joon Young said, “Even though I am tired, I am completely happy. I have my schedule but I also play in my free time so I don’t ever have time to rest.”

When asked what they do exactly in their free time Jung Joon Young answered, “I like going to PC rooms, I like drinking and hanging out, I like watching movies, and I like exercising. I also read books.”

For Roy Kim he said, “Instead of going crazy, I like eating, going to saunas, and going to cafes. I just like killing time.”

During the auditioning phase in the show the two handsome boys’ popularity became popular. They explained their friendship. “During Super Week we kept being put together. As we spent the time together, preparing our performances our opposite images and style became known. Our music and fashion styles are different, and maybe we even unbalance each other. We may seem to not match but in the end we deliver what people want. We’re really sharp and perceptive. Our timing is similar too.”

The two also spoke about their ideal types. For Roy Kim, “I like girls who are pretty without dressing up too much, especially girls with very pretty eyes.”