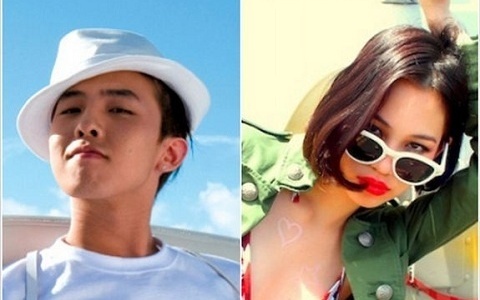 Just a couple days in and 2013 is shaping up to be a pretty eventful year in the dating department. Are celebrities being more careless or is the public more accepting of open relationships? Or are some netizens just jumping to conclusions again like Won Bin and Sooyoung’s scandal?

An online community site posted couple pictures under the title “G-Dragon and Kiko Mizuhara’s Vacation Trip.” G-Dragon posted the left picture on his twitter on Christmas Day with the caption “Merry Pinkmas.” Netizens were able to trace the location to be the Sri Panwa Resort in Phuket, Thailand.

One fan claimed that s/he also spent Christmas there took the picture on the right and revealed G-Dragon hanging out with a guy and a girl. A witness claimed Kiko boarded a plane headed to Phuket around the Christmas holiday, making many fans think she’s the girl in the picture.

G-Dragon and Kiko’s relationship have been questioned quite often since 2010 because of several pictures of the two hanging out.

Big Bang
G-Dragon
KPLG
Kiko Mizuhara
How does this article make you feel?