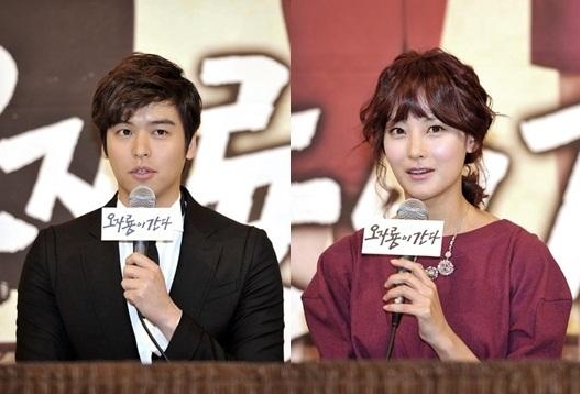 Oh Yeon Seo and Lee Jang Woo‘s dating scandal is slowly unfolding in the midst of a “We Got Married” controversy since Oh Yeon Seo is currently in a virtual marriage with MBLAQ’s Lee Joon.

While Lee Jang Woo’s sources are not commenting, Oh Yeon Seo’s reps spoke with the media and said, “Oh Yeon Seo is still just getting to know Lee Jang Woo,” and “They have been meeting each other with interest for about 1-2 weeks.”

Oh Yeon Seo’s reps continued, “The timing is a bit unfortunate,” and “Oh Yeon Seo has been an unknown celebrity for about ten years so it’s unfortunate that this happened now that she’s finally gaining attention.”

Another source of Oh Yeon Seo commented about her participation on “We Got Married.” They said, “We are in a sticky situation,” and “We are currently talking things over with the production staff.”

Oh Yeon Seo’s sources did comment, “Oh Yeon Seo and Lee Jang Woo are meeting each other. They probably got close because they have to work closely together. They don’t have a big age gap and have the same interests, which probably helped them to develop feelings for each other.”

However, they continued to say, “Both actors only met about twice or three times with many other people around them at the same time so it’s hard to say that they are officially dating,” and “We worry that this happening will take away their great chemistry on screen and make things awkward for them.”

Lastly, they said, “After more time, if their feelings grow, they may be able to develop into lovers but it’s still hard to say that they are at that stage right now.”

Meanwhile, there are rumors that Lee Joon might “remarry” After School‘s Lizzy for “We Got Married.”

Lee Jang Woo
We Got Married
KPLG
Oh Yeon Seo
How does this article make you feel?