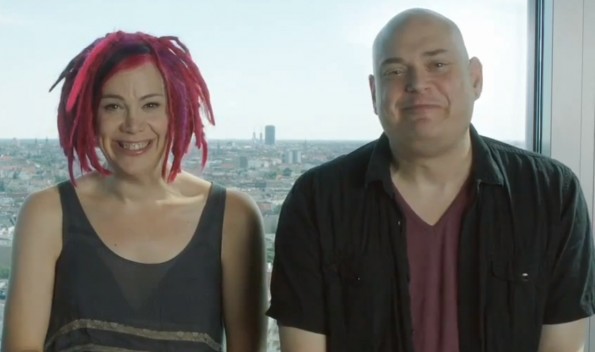 The Wachowskis and Soju!

If you loved the Matrix and you haven’t watched the recent January 3, episode of “Golden Fishery” you are missing out! The Wachowskis made an appearance on the show and promoted their upcoming film “Cloud Atlas” which stars Bae Doo Na.

They were ever so affable and endearing. On the show, the Wachowskis revealed their knowledge of the Korean alcohol soju.

Kang Ho Dong told the Wachowskis, “It seems like you two enjoy variety shows.” Lana Wachowski turned around and grabbed a bottle and pretended like she was pouring a shot while saying “soju.”

Then the Wachowskis were asked, “Who taught you about soju?” They replied, “Bae Doo Na. She told us to try out the alcohol and gave it to us. Bae Doo Na also taught us how to make soju bombs.” They even showed the hand motion when making soju bombs.

On this episode, Bae Doo Na talked about how she was cast for the upcoming film “Cloud Atlas.”