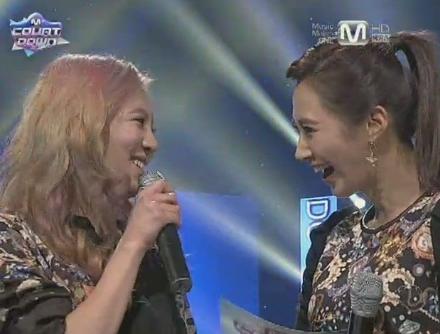 Yuri of Girls’ Generation couldn’t hold in her laughter on Mnet’s “M! Countdown.”

On the January 3 broadcast of Mnet’s “M!Countdown,” Yuri and Hyoyeon were the MCs of the show. In the show, they showed Girls’ Generation getting excited in anticipation for their comeback performance. The camera went back to the MC they caught the two watching the clips with open mouths. When the MCs realized what happened they laughed.

Girls’ Generation made their music show comeback on “M!Countdown” for their new song “I Got a Boy.” For their new they shed their princess-like image for a tougher and sexier image. On the show they performed their new song and “Dancing Queen.”