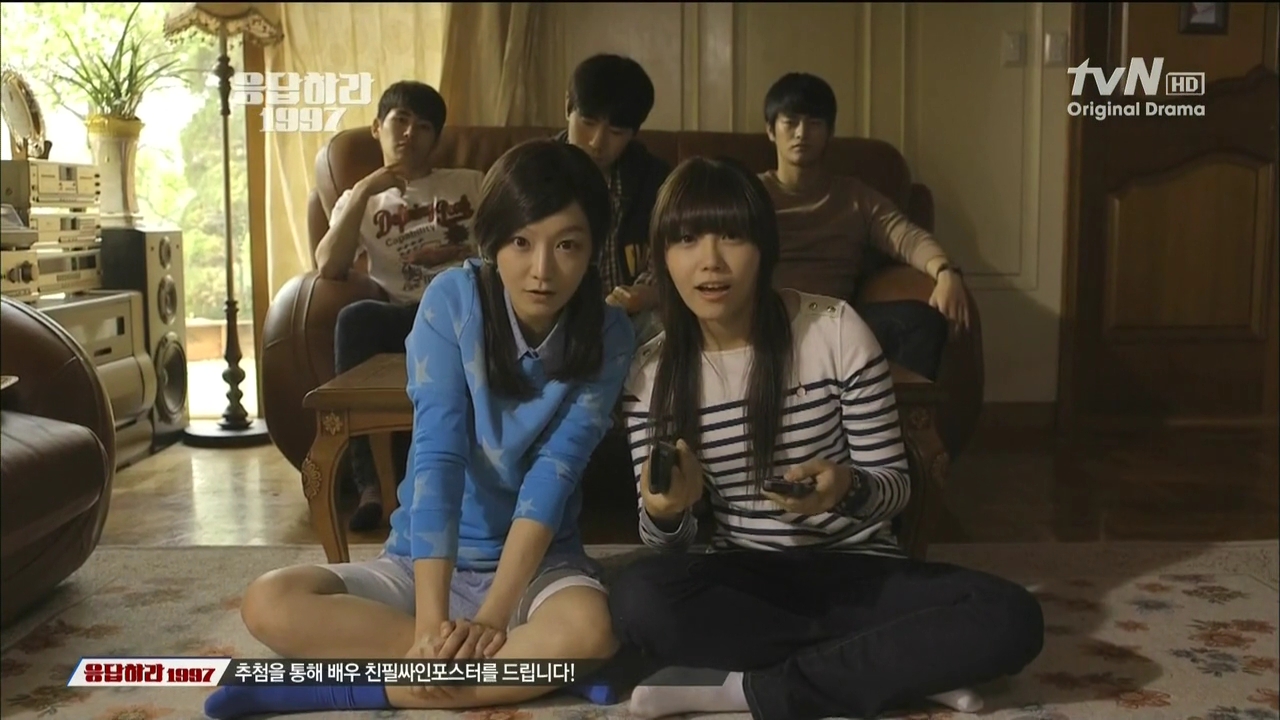 I love reading year-end reviews – it lets me walk down memory lane and reminisce about all the great (and not-so-great) dramas I watched or passed on this year. It’s not a surprise that our guest blogger from Outside Seoul took a fun and different approach in this very enjoyable read. -soomp

Whether it was a common plot device like this year’s abundance of time traveling or a little detail like a prominently featured umbrella, 2012’s Kdramas have been nothing if not on trend.

The question is, who did it best?

Was it a rainy year in Korea or what? Everywhere you turned some couple was huddled under an umbrella, embarking on a grand love affair.

From a storytelling perspective, it’s easy to see the appeal of the umbrella—they’re common objects that represent safety, care, and protection. Meeting someone at the bus stop with forgotten rain gear has long been a common occurrence in Kdrama (a particularly memorable example is found in 2010’s Playful Kiss), but 2012’s constant fetishization of umbrellas took it a step further. From the Love Rain logo to Big’s bookend beginning and ending, this year’s umbrellas were more than just props—they were plot linchpins.

Winner: Big may have betrayed every single principle of good storytelling, but it did one thing right: it took a new perspective on the standard umbrella trope. Instead being the direct object of a cheesy and cliché gesture of love, Big’s umbrella was stolen from its heroine with winking glee by its male lead. The rest of the drama was summed up in this one act—Kyung Joon was the catalyst that threw Da Ran’s life into chaos and inspired her to abandon the safety of her longterm relationship for the stormy unpredictability of a new love.

The shock value of guys locking lips proved too tempting for these shows to pass up. Both kisses are played for laughs (and ratings) rather than romance, but they sure do represent an interesting trend for conservative Korean drama.

Winner: Full House 2. I saw heterosexual kisses this season that packed less heat than the one shared by this drama’s pretty boys.

These two comedies don’t have much in common—one is a goofy workplace gagfest and the other is a grown-up romance. They do share one thing, though: knit dresses being slowly unraveled by a single loose thread. In both cases, the dresses are fire-engine red and the strings are held by the show’s male lead. Taking place in the dramas’ first episodes, these dress-demolishing scenes are silly good fun and also serve to develop the characters that are involved.

History of a Salaryman’s hopeless schulb of a male lead doesn’t always think about the consequences of his actions, so of course he would absently tug at a red thread he notices while sitting in a hotel lobby. And the female lead’s cartoony outrage when she realizes her dress is shrinking is further evidence of the nasty temper that this episode has already established for her.

The parallel scene in Gentleman’s Dignity is played out on a bigger scale—instead of the thread stretching across a single room, it trails for at least a city block before either character realizes what’s happened. Instead of being mad like Salaryman’s female lead, Yi Soo is paralyzed with impotent embarrassment and can’t even manage to cover herself without the male lead’s help. The male lead shows his character in the aftermath of the unwinding: suave, sophisticated, and take-no-prisoners, he barely bats an eyelash before appropriating a tablecloth and artistically folding it into a skirt replacement.

Winner: Although I disliked this show enough to drop it by episode 7, even I have to admit that Gentleman’s Dignity is beautifully filmed and does a great job with scene building. This segment in particular is flawlessly executed: everything about it works just right, from the bustling background of a walkable city neighborhood and the fabulous wardrobe to the dress’s slow, slow unraveling. Salaryman’s take on the scene is also fine, but lacking in epic scope.

Whether through a miracle or the miracle of hard work, two Kdrama characters really soared this year.

In his role as a self-professed angel, Kim Bum’s childlike grace was one of the many things that made Padam Padam such a pleasure to watch. Much like the rest of the show, his character was a study in light and dark—part wide-eyed innocent, part knife-wielding thug.

On the other hand, To the Beautiful You itself was something of a wide-eyed innocent, not quite fully formed but reasonably cute in spite of its half-baked nature. Its high-jumping male lead showed us just how much hard work goes into a competitive sport, all the while being juxtaposed with the show’s (arguably more compelling) second lead, whose athleticism is shown as innate and unearned.

(You could also make an argument for the inclusion of last winter’s Take Care of Us, Caption in this section, but as that show’s flight is entirely mundane I think it belongs elsewhere. Say, in a list of shows I didn’t care enough about to watch.)

Winner: Padam Padam’s unlikely angel would not only win the confrontation, he could probably also steal the TTBY kids’ wallets without anyone even noticing.

When you watch as much drama as I do, the locations can become just as familiar as the standard plot devices. Both I Love Tae Ri and I Miss You used this imposing stonework entryway as a backdrop to key scenes. A number of other locations popped up in both shows, which makes me wonder if they’re all part of the same property.

Why this gate all of a sudden? I have no idea—maybe the house it belongs to is up for sale, and the real estate agent thinks outside the box when it comes to marketing. Or maybe someone involved in the shows’ production owns the building. Heck, maybe it’s even a public space like a museum that rents itself out for extra cash on the side.

Winner: I Miss You, which thoughtfully added extra lighting so you could actually see what was happening.

One of Korea’s favorite drama tropes is the noona romance—a love story between a woman and a younger man. And dramas dealing with this topic almost always feature their leads on at least one motorcycle ride.

With examples dating back to 2005’s Hello, My Teacher and 2006’s delightful What’s Up, Fox, this pairing works well for a number of reasons. The motorcycle represents the younger man’s devil-may-care freedom and gives him a chance to take the lead in spite of Korea’s age-based hierarchical structure. There’s also the issue of the associated helmets, which further liberate the lovers by obscuring their identities, super-hero style.

Winner: From the show’s sexy, motorcycle-riding promos to the bike’s starring role in its meet-cute, I Do, I Do uses its wheels to best effect.

Shows about groups of female friends are a long-running trend in Korean drama, but this focus has shifted in the wake of 2009’s Boys over Flowers. In 2012, it was close male friendships that seemed to anchor every drama.

Whether they met in prison, high school, or the royal court (three places frequent drama watchers will realize aren’t entirely dissimilar), this year’s men were always there for each other—except when they were throwing each other off cliffs, anyway. These modern-day Flower Fours looked to each other for camaraderie, support, and guidance, as well as the occasional nation-saving suicide mission.

Winner: The F-44 from A Gentleman’s Dignity. Friendships don’t get much better than this bromance—having been friends for at least twenty years, these guys have seen and accepted each other at their best and at their worst.

Korea loves a girl dressed as a guy, but this year the trend was for exactly the opposite; instead, male drama stars were disguised as girls. This is a tricky feat—especially when adults are involved, it requires more than binding your chest and wearing baggy jeans the way most female cross-dressers do in Korean dramas.

Boys in girls’ clothes were generally used as a comedic element in 2012, with most of them briefly trying out femininity in hope of personal gain. But might this switch from the tradition of girls dressing as boys be evidence of women’s increasing power in Korean culture and society?

Winner: To the Beautiful You not only featured multiple examples of boys dressed as girls, it also took the whole thing to a head-spinning new level: Episode 6 saw a girl pretending to be a boy compete in a talent show as a boy pretending to be a girl. I get dizzy just thinking about this scene, but it was clearly a stroke of genius on the part of some Drama Overlord out there.

The most talked-about trend in Korean dramas this year, time travel was approached from practically every angle. Characters jumped forward and slipped backward, with some traveling into historical time and others delving into their own pasts.

Everyone likes a good time travel story—they’re intriguing intellectual exercises and invite us to imagine how different our lives could be in another time. But why this trope is so popular right now is another question. Other bloggers have noted that it offers the best of both worlds to makers of television: they can capitalize on the popularity of sageuks, while also raking in money from the product placements in their contemporary scenes. (I guess that explains the starring role of that Sony cell phone in the finale of Queen In-hyun’s Man.)

Winner: Queen In-hyun’s Man. Arguably this year’s most powerful love story, Queen In-hyun’s Man is also 2012’s finest time travel drama. It takes the practical aspects of time travel into consideration and incorporates them into its plot without sacrificing the character-based storytelling that Korean drama does so well.

For more drama commentary and reviews, visit Outside Seoul.

A Gentleman's Dignity
Love Rain
Operation Proposal
Padam Padam
Big
Queen Inhyun's Man
I Love Lee Tae Ri
To the Beautiful You
The Thousandth Man
2012
Full House 2
I Miss You
Ma Boy
History of the Salaryman
Twelve Men in a Year
Drama themes
miscellaneous
How does this article make you feel?