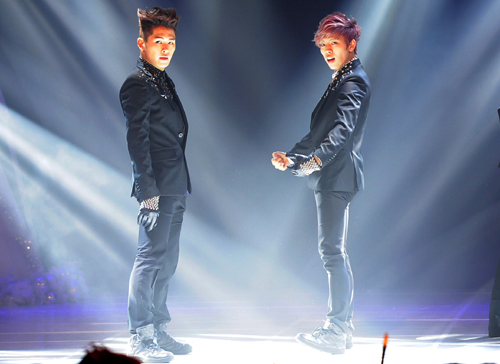 We get a glimpse of the wild theme of the music video with images of a sexy car, alcohol, bold guys, flashy jewelry and a human skull. A lot of the video seems to be in black and white but there are also scenes that feature strong colors.

The video opens with a red human heart graffiti on the wall, then timed to the strong music beat, changes to a scene with the two guys sitting in a sexy green car. In some of the later scenes, we see Hoya and Dongwoo confidently posing wearing flashy suits draped with bling-bling jewelry and accessories.

“Infinite H” will release their highly anticipated album, “Fly High” on January 11. The day before the album launch, the will hold a showcase at the “Uniqlo AX.”