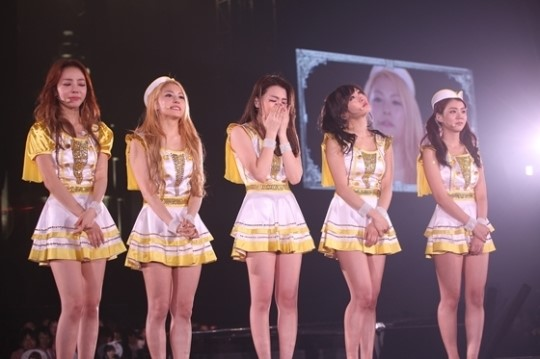 On January 6, Kara successfully completed their Tokyo Dome Concert. This was the first time ever a Korean girl group held a solo concert at the Tokyo Dome.

It was an emotional day for both the fans and the Kara’s members. Titled “Karasia 2013 Happy New Year in Tokyo Dome,” this concert represented Kara’s unbelievable success in Japan despite all the scandals and difficulties they went through in last few years. With over 45,000 fans, Kara members could not help but show tears of joy.

The first performance was of “Pandora,” which caused the audience to give a standing ovation. Other hit songs Kara performed during the three hour long concert included “Speed Up,” “Jumping,” and “Dreaming Girl.” In addition, “Lupin,” “Step,” and “Let it Go” were also performed in Korean, and the fans appeared to be surprisingly excited with these songs.

Following the group show were the surprise solo performances. With a live band behind, Goo Hara played the drums, then a guitar, and performed the “I Love Rock N Roll.”

Han Seung Yeon, in addition to singing an emotional “Strong Enough,” also shared a personal story. She stated that when she was young, she went to a concert with her friends. As she enjoyed the show, Han Seung Yeon explained that she knew she wanted to be a performer. She also added that even now everything feels unreal to her.

As the end neared, every members of Kara and the fans all became emotional, starting with Han Seung Yeon.

Han Seung Yeon admitted that three days earlier, she had a nightmare of unsuccessful concert. She then started to cry and said, “I was so worried. But so many of you have come and supported us. Thank you so much.”

Nicole, also crying, thanked the fans. She added, “I can’t believe it. I am still nervous, but I am also happy. Your love is what keeps us going.” Kang Ji Young also stated, “Thank you so much for everything. Kara and our fans are like the two wheels on a bicycle. We need you to be able to go forward.”

Goo Hara, who has been crying the entire time, said, “Tokyo Dome has been our dream ever since we made our debut in Japan. I will never forget this day. We will always do our best to perform for you.” Finally, Park Gyuri added, “This concert was possible because of our fans. Thank you.”

To show their appreciation, Kara also performed addition songs including “Rock U,” “Girls Be Ambitious,” “SOS,” and “Mister.”