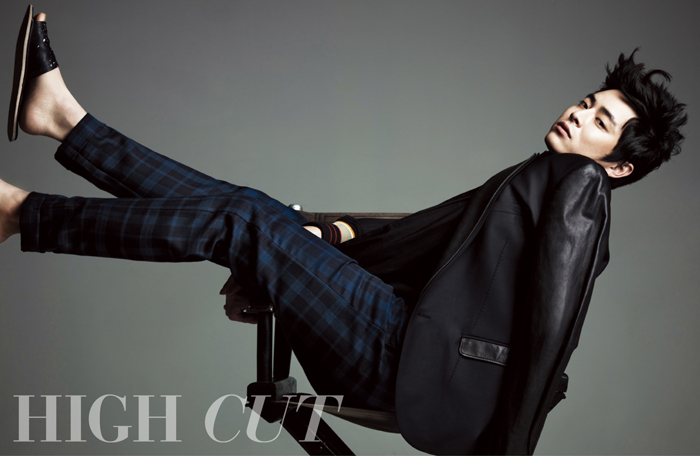 Actor Jo Jung Suk talked about his emergence as a star in 2012 and career prospectives in 2013 in his interview for the pictorial in magazine “High Cut.” During the photo shoot, Jo Jung Suk expressed both innocent smiles of Nab Ddeuk in film “Architecture 101” as well as the chic and carefree sides of himself as an actor.

After the photo shoot, Jo Jung Suk talked about his transition from musical theater to films in the interview. He said, “After I finished musical theater production ‘Spring Awakening‘ in 2009, I filmed a TV drama called ‘What’s Up‘ for a year in 2010. But the show had a really hard time getting up, so it ended up airing in winter 2011. Many people around me started worrying about me as this stalled my career for almost a year. They said, ‘Why did you quit musical theater? To do this?’ To be honest, I was really happy to work on films and TV shows like I always wanted to. I wasn’t worried or nervous at all.”

In the interview, Jo Jung Suk also talked about film “Architecture 101,” the film that established him as an actor and brought him fame. He commented, “One of my really good friends told me at the beginning of last year, ‘You’re going to do well, for real.’ I was a bit confused about that statement at the time, but everything made sense when I did become successful and he told me once again ‘See, I knew you were going to be successful.’ Personally, I’m not a big believer of fortune or fortune telling, but I think my friend asked a friend of his, who does fortune telling, about my luck and career.”

Jo Jung Suk also talked about his upcoming film “Physiognomy.” He said, “There’s so much I’m realizing and learning about working with great people. I work mostly with Song Gang Ho, and we have a great chemistry. When Song Gang Ho and I work together for a test shoot just based on the director’s oral direction, some really fun things come up. It’s going to be a great film.”