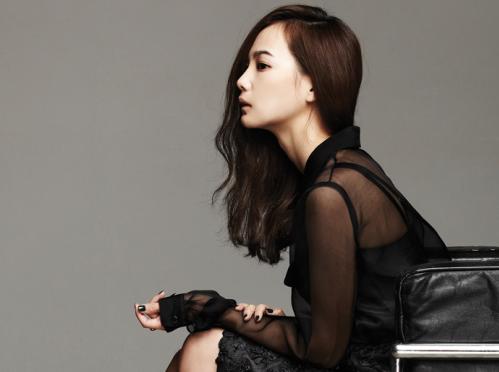 Actress Yoon Seung Ah showed her amazing body in a pictorial for the entertainment and lifestyle magazine, “1st Look.”

In the January edition of “1st Look,” the actress wore the clothes of designer Kim Yoon Jung, who recently won a 1 billion won prize for her pure and elegant dresses on the fashion show “Sold Out.” Yoonn Seung Ah is also the host of the show.

The beautiful actress shows a variety of poses and expressions as she wears black and white in a very modern look. Although she looks flawless in all of the pictures, one picture stands out. In that picture, Yoon Seung Ah is wearing a tight gray patterned dress that accents her curves. She looks over her shoulder with seductive eyes, which completes this sensual photo.

In the magazine, Yoon Seung Ah explained the premise of her show. She said, “The purpose of ‘Sold Out’ is to complete missions of selling clothes. The clothes not only have to be pretty but they also must be attractive to the public. It is all about what the consumers want and the show makes us think about the products that are put on sale.”

She also praised designer Kim Yoon Jung and said, “She studied in Paris for several years and she really knows how to show her true colors in her fashion. Through the second and third missions, she learned how to communicate with the public. She is a designer who knows what women want.”

1st Look
Yoo Seung Ah
KPLG
How does this article make you feel?