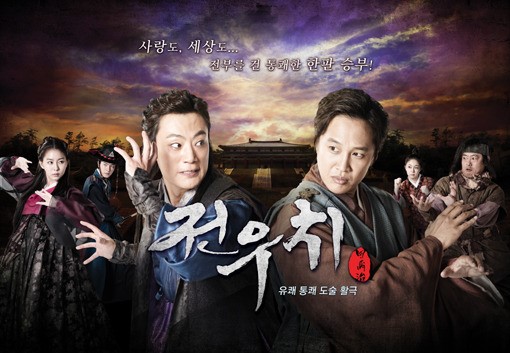 Behind the scene photos of the drama “Jeon Woo Chi” showed the cast, including Cha Tae Hyun, UEE, Baek Jin Hee, Hong Jong Hyun, and Jooyeon, trying to keep warm between shots. Despite the cold weather, the actors had bright smiles to show their enduring attitude.

Cha Tae Hyun has more scenes out in the cold because of his portrayal of two different characters. In between takes, he quickly puts on a thick winter coat, gloves, and black earmuffs. His co-star, UEE, also has a parka to wear over her hanbok costume. She looks adorable with her fluffy white ear muffs. After seeing UEE’s white earmuffs the staff members teased her, “Don’t they look like steamed buns? I want them now.”

Actress Baek Jin Hee wears red and tan earmuffs that are almost as cute as she is. This is not only her first historical drama but also her first time filming in the bitter cold. In one picture, she warms her face by covering them with hot packs. She said, “It is cold enough to keep people indoors but filming has been a lot colder than I expected. To film ‘Jeon Woo Chi,’ all the cast members are wearing their own earmuffs.”

The charismatic Hong Joon Hyun kept his hands warm in his pockets in between takes. His red and black jacket and earmuffs matches his traditional solider uniform so well that it all looks like a set. Jooyeon looks pretty and tough in her costume and cute strawberry earmuffs that were a gift from a fan.