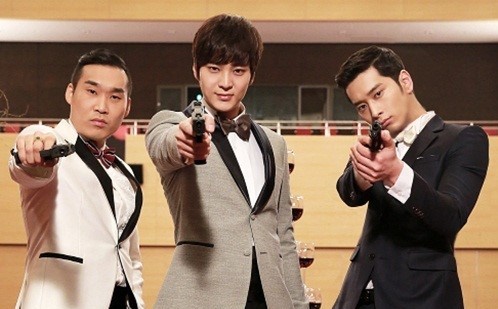 On January 9, a new still for the upcoming MBC drama, “7th Level Civil Servant” that showed Joo Won, Hwang Chan Sung and Son Jin Young in dashing suits and holding up a gun was released.

In the photo, Joo Won dons a gray tuxedo with a charismatic look. Hwang Chan Sung sports a sharp-looking black suit with a cocked head and strong eyes. Son Jin Young also adds to the dramatic still with a white tux and a mysterious expression. The three men seem like they are in a fancy banquet room.

Last year, Joo Won received high acclaim for his acting through the successful KBS drama, “Bridal Mask.” For this drama, he plays the skillful Han Gil Ro, who gets accepted into the national security team and dreams of being the next James Bond.

Hwang Chan Sung plays the role of Gong Do Ha, who is a genius and has a cold but forward personality.

Son Jin Young, who transformed from a singer to an actor through the MBC hit drama, “Light and Shadows,” is also garnering interest for his next role.

“7th Level Civil Servant” is an action romance drama about a rookie national security team member, who believes that everything is a lie except for love. It will air after “I Miss You” ends. The pilot episode will air on January 23.